The Paradox of Divine Faithfulness - Part 1: Infinity At A Cost 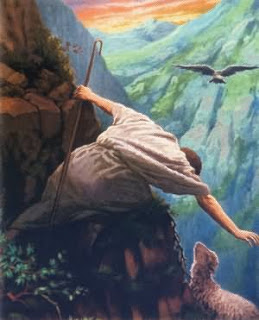 If we confess our sins, He is faithful and just to forgive us our sins and to cleanse us from all unrighteousness. (1Jo 1:9 NKJ)

The universe is not a free lunch. Nothing is free under the sun though some may think it is or wish it is. And if we see or receive something that is free, it is because somebody had paid for it.
Somebody has got to pay anyway.

-In any act of charity, the giver incurs the expense
-In any forgiving of debts, the creditor has to bear the loss

It is understood by some that God is only and just the “Wholly Other” the One who has no comparative in this universe.

Sometimes, you may have heard people say, “Well, I’m not God; God can forgive so much, but I am not God”

We read about the miracles of Jesus and are stunned by the greatness of power. We read about Jesus turning water into wine at Cana and the miracle of feeding the 5000 men (besides women and children) with 5 loaves and 2 fishes, and we feel like saying, “Wow! This can only be the hand of God, the One who is infinite in His riches and unlimited in power!” “His resources never deplete though used from day to day, His treasures have no minuses nor pluses though there are debits on a daily basis.”

But, let's think of this. In John 6:12 after the miracle of multiplication of loaves and fish, when all are filled, why does Jesus say, "Gather up the fragments that remain, so that nothing is lost." (Joh 6:12 NKJ)

Why does the Infinite One need to gather fragments?? What does loss mean to God??

This is the cardinal truth of the Gospel. And the truth is that though God is infinite in His Power and in His Wisdom, profit and loss matter to Him. The fact is God also has to pay the price for what he does in a universe which is not a free lunch. Now, this may seem very blasphemous for some who think that God is not like man to suffer loss or gain due to His infinite nature. However, a little pondering over the scriptures will unravel many significant truths.

- In His Parables of the Lost Sheep and the Lost Coin, Jesus portrays God as someone who goes after the one lost one… Why should He do that if His resources are infinite? Why doesn’t He let the world and everything perish and create another new world? I believe it is because He is not willing to lose anything that truly belongs to Him, and He is not willing to let go. He will redeem His own no matter what price He has to pay for it. And you and I know the price He paid.
- In the Temptation of Jesus when the devil tempted Jesus, his first question was “If you are the Son of God, turn these stones into bread”. Isn’t that the general tendency of humanity towards God, even the tendency of some Christians. We believe in a God who can turn stones into bread, we love fairy tales and magical worlds where wishes come true and fantasies materialize the moment they arise. But, Jesus rebuked the devil with the Word, “Man shall not live by bread alone, but by every word that proceeds from the mouth of God.” In other words, though it is true that man needs bread and works for bread to eat and live, what does it matter to live a life that is opposed to the word of God and is going to hell? Bread can sustain man on earth, but God is sovereign over the universe. Life is not just about eating and drinking.

I believe one reason why the Son of God refused to turn stones into bread was because He knew that the Universe is not a free lunch and He Himself was the Price that Heaven paid in order for the Kingdom of God to come on earth. MIRACLES also have an economic value, a purpose, and are not meant for squandering on personal hunger. Jesus knew He was not going to die by hunger; that was the word of God, and so there was no rationale for turning stones into bread. Also, a Son of Man who turned stones into bread to feed his belly will know nothing of the price that humans pay in order to eat their bread.

Students of apologetics can find here some hints to the biblical answer to the haunting problem of evil in the world. God lets the world according to the principle of sowing and reaping. He allows suffering because the very principle of returns and fruitfulness involves the possibility of both profit and loss.

If you follow our line of argument, we have been meditating on the topic THE COST OF DIVINE FAITHFULNESS.

Faithfulness is a cardinal virtue of God because it relates to God Himself to who He is. It is an aspect attribute of Truth. The other aspects of Truth are righteousness, justice, and integrity.
Faithfulness, Righteousness, Integrity, and Justice are aspects of Truth which is a cardinal virtue of God. Therefore, we have the statement, “God cannot deny Himself” (2Tim.2:13). In other words, God is true to Himself, is faithful to His own nature and being. We don’t find expressions equal to God being merciful to Himself or kind to Himself or so on; because mercy, grace, and kindness are in relation to the universe, but Truth is cardinal and internal to God.
But, you may say, well that is true about anyone… However, we know that is different with men. Almost reverse. We are usually untrue to ourselves, faithless to ourselves; but on the other hand self-pitying, self-compassionate, self-kind, selfish and plagued with every kind of depression, emotional breakdowns, and psychological distress. Therefore, we read "If we are faithless, He remains faithful; He cannot deny Himself." (2Ti 2:13 NKJ)

It is impossible for God to be unfaithful because He is consistently true, He is Light. There is no darkness in Him.

Now, God is also merciful, kind, and longsuffering. Lamentations 3:22-23 says
Through the LORD'S mercies we are not consumed, Because His compassions fail not. They are new every morning; Great is Your faithfulness. (Lam 3:22-23 NKJ)

In other words, God is faithful in showing His mercies and His compassions. Which means again that even the mercies and compassions or God do not stand by themselves but are consistent because of the faithful nature of God. But, faithful to what?
1. To HIMSELF – To Who He Is
2. To HIS Established Rule
3. To His Covenant
4. To His Promises
But, when there is a defaulting side, then God’s mercy comes into play and mercy is a costly affair and when God shows mercy on man, it is at a price He has to pay.

The Cost of God’s Faithfulness to His Own Nature of Justice and Mercy was His Own Son. And He paid the price. That’s why you and I are here.

Again, God is Self-sufficient, and no loss is loss to Him. When man rejects God, it is man who loses. Yet, Jesus spoke about the lost and His mission to seek and save them.

That's the Paradox of Divine Faithfulness, because He will not let go what He knows He can redeem, though it cost Him Himself.