Do Not Harden Your Hearts 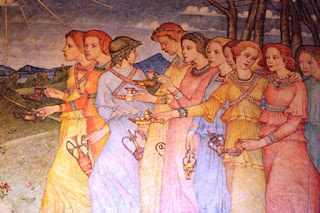 But exhort one another daily, while it is called Today, lest any of you be hardened through the deceitfulness of sin.

Whenever God speaks, it is Today, and He demands that we respond positively to His voice as soon as we hear His word. Those who neglect to receive the word immediately or procrastinate to obey, harden their hearts. When a person listens to the voice of God and hardens his heart  from obeying God, he puts himself in the path of hardening, and the more a person gets hardened the more difficult it is for the word of God to find a place in his heart. Such a heart becomes like a stone that will take lot of hammering to break.

1. The Rebellious Heart Hardens Itself Against the Voice of God
Therefore, as the Holy Spirit says: Today, if you will hear His voice, Do not harden your hearts as in the rebellion, In the day of trial in the wilderness, Where your fathers tested Me, tried Me, And saw My works forty years. Therefore I was angry with that generation, And said, They always go astray in [their] heart, And they have not known My ways. So I swore in My wrath, They shall not enter My rest. (Heb.3:7-11)

2. The Proud Self-Planner Hardens Himself against Gods Will
Do not boast about tomorrow, For you do not know what a day may bring forth. (Prov.27:1)

There are those who are full of their own plans and are unwilling to accept the plan of God because they feel that Gods plan interferes with all the hard labor they have put into their own plans and programs. They don't want God to spoil their schedule or arrangements. These are they who rely on their own understanding and do not trust in the Lord with all their hearts. They are so proud and boastful about their own dreams that they will be offended if God asked them to forsake all of their dreams, take up their cross, and follow Him. There are some who say, I will first do this and complete this, then I will serve God. These are those whose heart is becoming hardened and it will be difficult for them to serve God.

3. The Fearful Sinner Hardens His Heart Against the Convicting Work of the Holy Spirit
And after some days, when Felix came with his wife Drusilla, who was Jewish, he sent for Paul and heard him concerning the faith in Christ. Now as he reasoned about righteousness, self-control, and the judgment to come, Felix was afraid and answered, Go away for now; when I have a convenient time I will call for you. (Acts 24:24-25)

There are those who would only love to listen to sermons that suit them and do not like to listen to a preaching that would bother their conscience, because their works are evil and they either want their conscience to be blind about this or to satisfy themselves with the assurance that even the preachers of the word aren't able to follow what they preach. In the next verse we read that Felix was waiting for Paul to bribe him. But, Paul was not a preacher of word alone; he practiced what he preached. He never compromised. Felix was a fearful sinner; who was afraid that the light of the word would expose his sinful heart and he would be bothered in his conscience. There are people who change churches because they find the preaching too hard to bear. There are people who move away from a leadership because they are ashamed to work under a godly leader. They have hardened their hearts.

4. The Self-Oriented Servant Hardens His Heart Against Serving God
Thus speaks the LORD of hosts, saying: This people says, The time has not come, the time that the LORDs house should be built. Then the word of the LORD came by Haggai the prophet, saying,[Is it] time for you yourselves to dwell in your paneled houses, and this temple [to lie] in ruins? Now therefore, thus says the LORD of hosts: Consider your ways! (Haggai 1:2-5)

Like the man with the one talent who tried to accuse his master when he was found to have done nothing for the Kingdom of God, there are those who harden their hearts and do very little or nothing for God because all the time their mind is occupied with their own business, job, comfort, and desires. They find reasons and excuses, but such excuses are abominable in the sight of God. If a person has time for himself but has no time for God, it means that such a person is not a servant of God, but a servant of his own flesh. His heart is hardened, therefore, he cannot serve God. For no man can serve two masters.

5. The Foolish Virgins Harden their Heart Against Being Ready All the Time
Then the kingdom of heaven shall be likened to ten virgins who took their lamps and went out to meet the bridegroom. Now five of them were wise, and five [were] foolish. Those who [were] foolish took their lamps and took no oil with them, but the wise took oil in their vessels with their lamps. But while the bridegroom was delayed, they all slumbered and slept. And at midnight a cry was [heard:] Behold, the bridegroom is coming; go out to meet him! Then all those virgins arose and trimmed their lamps. And the foolish said to the wise, Give us [some] of your oil, for our lamps are going out. But the wise answered, saying, [No,] lest there should not be enough for us and you; but go rather to those who sell, and buy for yourselves. And while they went to buy, the bridegroom came, and those who were ready went in with him to the wedding; and the door was shut. Afterward the other virgins came also, saying, Lord, Lord, open to us! But he answered and said, Assuredly, I say to you, I do not know you. Watch therefore, for you know neither the day nor the hour in which the Son of Man is coming. (Matthew 25:1-13)

I think that a person who cannot come to church on time, not because he couldn’t find a conveyance, but because of his lazy and procrastinating nature, will not be ready at the coming of the Son of God. I see no reason why a person who is lazy and neglectful can ever be ready on the Day of the Lord. Undisciplined and lazy people are hardened people. They are foolish because they think that whatever they do, they are fine. But, they aren’t. God wants us to make sure that our lamps are full of oil, that we take care of our own lamps, that we carry our own cross, that we be ready for His coming all the time.

Remember:
When the Spirit convicts us of sin, if we do not immediately repent and turn to God, then we only go away from Him. If we become slothful and lazy and uninterested in the plan of God and His desire, we are no longer His faithful servants; we only become stubborn and wicked and chaff for the fire of God's judgment. If we neglect the Gospel of the Kingdom and do not prepare our hearts to seek God and be ready for His coming, we will be astonished and ashamed on the Day of Judgment. So, it's important for us while it is called Today to exhort one another daily.

“Today, if you will hear His voice, Do not harden your hearts”