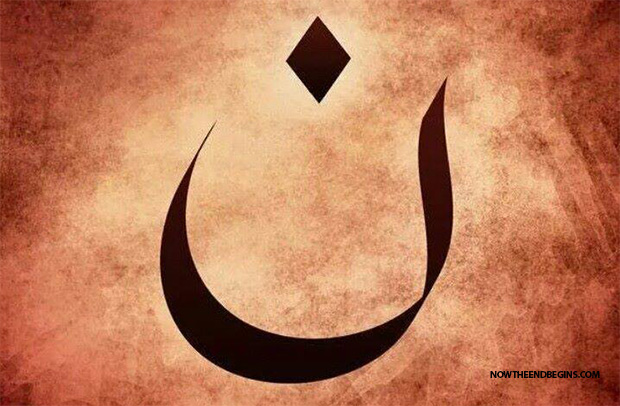 The Arabic Letter "N" that stands for "Nasrani", i.e. Christians. ISIS used this letter to mark the homes of Christians left in Iraq. “N”, or ن, is the first letter of the Arabic word for Christian, “Nasrani” or Nazarene. The letter has become as symbol of global solidarity with Mosul Christians. The Nazarene taught that it is impossible not to love when He loved the world so much that He gave Himself into the hand of the violent in order to save them for their sins.

The depth of estrangement and contortion was manifest in the kind of death administered: the death of the Cross. It was the world that failed to recognize Him – the world that belonged to Him. Yet, the real story is not that the world rejected Him; the real story is that He was willing to let the world reject Him. Divine self-emptying, divine servanthood, and divine crucifixion are powerful themes that shock the philosophy of religion. Nietzsche called the greatest of all sins to be the murder of God (deicide). There was nothing more sinful than that. On the reverse, the greatest of all righteousness fulfilled was in the self-giving of the Son of God. This self-giving brought an end to the history of hostility between man and God. It cancelled all debts. Man had committed the greatest of all crimes, and God had allowed it to be done to Him in the ultimate divine sacrifice. The Cross was where Justice and Love met vis-à-vis. It was where man affirmed his estrangement and God affirmed His belongedness. It was where God accepted man as he was. The one act of righteousness by the Son of God nullified forever the writ of accusation against all humanity. The veil was torn away; the entrance is paved, now the ball is in our court. He has accepted us. Do we receive Him or choose to remain estranged? (Estrangement and Belongedness)