The Third Temple At Jerusalem, How Far Now?

- June 20, 2015
The building of the Third Temple is one of the most anticipated events for Jews all over the world; for, the Temple is considered to be the heart of the identity of Jerusalem as the Holy City of God. For about 2000 years now, Jerusalem and the Jewish people have been Temple-less. However, the vision of a third Temple burns brightly in their hearts. 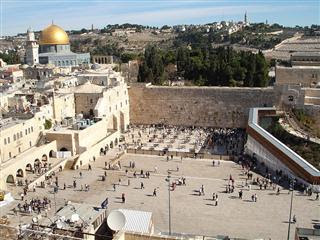 History tells us that the First Temple built by King Solomon was destroyed by King Nebuchadnezzar of Babylon in 586 BC. In 538 BC, Cyrus the Great Emperor of Persia ascended the throne and decreed the construction of the Second Temple. This temple was completed in around 516 BC under the leadership of Joshua the High Priest, Prince Zerubabel, and prophets such as Haggai and Zechariah. The Book of Ezra gives an account of this construction and the hindrances the people had to overcome during the work. The Second Temple was renovated and remodeled during the reign of Herod the Great in the first century BC. This temple was destroyed by the army of General Titus of the Roman Empire in AD 70. This year also marked the wide diaspora of the Jewish people and alienation from their own Promised Land.

After the Holocaust of World War II, Zionist movements finally succeeded in convincing the UN General Assembly to recognize for the Jews their own independent Jewish State. Consequently, on 14 May 1948, the State of Israel came into existence. The event is considered to be the fulfillment of the prophecy of Isaiah the prophet that the nation will be born in one day (Isa.66:8). Christian scholars recognize this day as the fulfillment of Jesus' prophecy of the fig tree budding (Matt.24:32), a sign of the end days.

Jewish scholars consider the Third Temple to be the temple revealed in the book of Ezekiel 40-42. Many believe this will be built during the reign of the Messiah (anticipated by the Jews). However, there are groups who believe that it is the Jewish people's responsibility to build the temple. At present, the Temple Institute and the Temple Mount and Eretz Yisrael Faithful Movement make endeavors concentrating on the prospective construction of the Third Temple. Articles to be used in the temple are already being collected.

However, controversy prevails over both the site and the time of the Temple. We already have seen the disagreements regarding whether it would be built after the advent of the Messiah (still anticipated by the Jews who do not accept Jesus as the Messiah) or whether it has to be initiated by the Jewish community. The site is also a matter of dispute with some saying that the original site is now occupied by the Islamic Dome on the Rock and others saying that the original site is actually between the Dome and the Al Aqsa Temple.

Most Christian prophetic scholars believe that the Jewish attempt to construct the Third Temple will go along with their submission to the Antichrist, whose reign will be marked by a great mass deception and the fall of a great number of the elect. According to the book of Daniel, the Antichrist will violate his covenant with the Jews in the middle of his 7-year reign and establish the abomination of desolation in the temple (Dan.9:27; 11:31). This will be the time of Jacob's trouble for the Jews and Great Tribulation for the world (Jer.30:7; 2Thess.2:3-12; Matt.24:21,22).

But, then what about Ezekiel's Temple? Some Christian scholars consider it to be the Fourth Temple of the Millenial reign of Christ on earth (Rev.20:4). However, there is objection to this interpretation since Ezekiel talks of sacrifices, and the New Testament teaches that the New Covenant has made the Old Covenant obsolete (Eze.44:15; Heb.8:13). But, the answer given is that the Jews will offer sacrifices in retrospection (which interpretation still doesn't seem honest to the rule of the New Covenant). However, seeing that a possibility of deception is still possible during the Millenium (Rev.20:8,9), this interpretation may not also seem to be completely unlikely. It is apparent that not everyone during the Millenium is actually saved in the sense of having believed in the Lamb of God who takes away the sins of the world. Of course, again, not everyone also believes in a literal and prospective 1000 years reign of Jesus Christ. However, the Millenium view does answer a number of enigmas in prophecy that could not otherwise be understood. Another suggestion is to interpret Ezekiel's Temple figuratively. But, not all agree with an absolute figurative interpretation. The Temple Institute acknowledges the fact that many details of Ezekiel's Temple are difficult to understand and looks forward to the Messianic era for an understanding of those aspects. Till then, it states, "it is the Second Temple's attributes that must be upheld when rebuilding the Temple."
Articles Israel Prophecy Temple