The Remorse of Ashoka - Poem 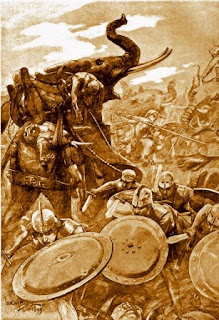 THE YOUNG WARRIOR stood motionless
On the bloodied ground where battle
Had raged yesterday with vehemence
Of heat and sound; of flashing metal
Clashing, slicing, piercing, battering,
Flying, falling, striking, slaughtering
Men and women in the battle of pride,
Filling the air with blood curdling cries
As bodies fell one after the other with sighs –
All now calmed; the violence, stilled; the battle, won.

“But, what did I win here?” the Prince thought,
As his eyes gazed around the tormenting scene
Of strewn bodies that had once valiantly fought
A battle of dignity and the right to be rightly free;
“What have I gained now?” the Prince sighed,
“An open grave, a banquet to worms and vultures,
A treat to hyenas.” “It’s not so,” the devil lied
“They deserved this for being against your culture!”
A little child came walking with tears in his eyes;
“My remorse shall equal all my sin,” the Prince began…

“For every act of violence that I have done,
Ten thousand acts of non-violence shall I return;
For every hand of cruelty that I did wield,
Ten thousand hands of kindness shall I yield;
For every single child that I did orphan,
Every child of the world as mine shall I reckon;
For every beast that this war has slaughtered,
Every beast of the field shall henceforth be preserved;
Let my remorse be so great that never a life I will annihilate;
May trees and beasts, as all humans, now freely live
And breathe peace in this Land of Non-Violence.”

“You are a fool to make such a pledge” the devil replied,
“Another fool for a Prince after Siddhartha, who shunned
The delight of palace for the wilderness’ plight,
The heroism of war for a monk’s bowl of rice,
The light of victories for a patch of worthless lies;
And what will you gain by all these?
The enemies will gain their upper hand –
He who refuses to slaughter will himself be slaughtered –
Then, you shall repent and relent; but, it shall be
Too late! For Fate will have switched her wand –
He who doesn’t listen to Time shall by Time be bartered –
So, be bold, O Great Maurya and do your duty;
It is the duty of the Kshatriya to slay the enemy;
Let Ahimsa be the delight of the weak herd
Who can neither string a bow nor wield a sword;
Leave non-violence to the monks and the nuns;
Let them pursue remorse, holiness, and all that is weird;
But, you must pursue power by sly and force;
And make all efforts to follow the violent course
Until you have finished with all and all is won,
And every inch of this land has become yours!”

“Begone, O Prince of Vices!” the Great Maurya roared,
“I will have none of yours; for, you are a concocter of lies:
What I have purposed I will with all my strength do;
As I said, the path of kindness and non-violence shall I pursue.
This shall be my penitence; this shall be my lot;
This shall be my inheritance, my only reward;
This shall be the evidence of the change of my heart
That I do what I do desiring no other reward
But the good of all, dharma as ahimsa, peace on earth.
My hands will sow kindness and reap kindness in return;
My eyes will sow goodwill and reap goodwill in return;
My thoughts will sow benevolence and reap benevolence in return;
My life will sow righteousness and reap righteousness in return –
Thirty-fold, sixty-fold, and hundred-fold; wasted, none!
I can barely atone for the sin I have done…
Yet, no more! What’s done is done, may Justice do His work!
I shall return to acts of kindness; to kindness is Ashoka won!”


After the Battle of Kalinga, King Ashoka (304-232 BC) renounced war and violence forever. He embraced the non-violent path of Buddhism and preached kindness to all living creatures. His reign is known as the Golden Age of Indian History. “Ashoka” means “without grief or sorrow.” The wheel in the center of the Indian Flag is called “Ashoka’s Chakra”; it symbolizes Truth, Justice, and Virtue.

Regarding Conversion
Quote added on August 16, 2012

"the tradition that Ashoka actually became a Buddhist monk is now discredited. The inscriptions never mention the Buddha and show no awareness of his 'Noble Eightfold Path' or any other Buddhist schema. Even the idea of 'conversion' is suspect, since codes like those of the Buddhists and Jains were not seen as exclusive...... conversion, in the sense of renouncing one set of doctrines for another, was meaningless." [John Keay, A History of India, London: Harper Perennial, 2000, p. 96]