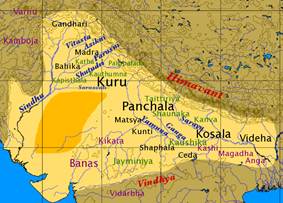 The Vedic Age begins with the supposed arrival of the Aryans and the composition of the Rig Veda. Again, there are differences of opinion regarding whether the Aryans really arrived or they were the original inhabitants of the land. For instance, in his History of India, Mountstuart Elphistone wrote, “There is no reason whatever for thinking that the Hindus ever inhabited any country but their present one; and as little for denying that they may have done so before the earliest trace of their records or traditions.”[1] Elphinstone argued this from the absence of any Vedic allusion “to a prior residence, or to a knowledge of more than the name of any country out of India.” However, his arguments do not convince most historians. Keay notes:

..it is certainly curious that the Vedas say nothing of life in central Asia, nor of an epic journey thence through the mountains… The usual explanation is that, by the time the Vedas were composed, this migration was so remote that all memory of it had faded…[2]

Allowing “first for a major time-lapse (say two hundred years) between the Late Harappan phase and the Aryan arrival in India, and then for a plausible memory gap (say another two hundred years) between arrival and the composition of the earliest Vedas,”[3] Keay suggests the period between 1500 BC and 1300 BC as the time of the Aryan arrival. He is among the group of scholars that favor a more gradual migration theory to the previous Aryan-invasions theory. He thinks the multiple waves of migration theory best fits the fact of the Aryanisation of the entire sub-continent. However, as we have seen earlier, there are other theories to account for the fact of Aryanisation (or Sanskritisation). For instance, there is the Brahminic mission theory as well as the Asura composition of the Rig Veda theory. But, whatever, we are only left more with theories and not established facts with regard to the origin issues. Nevertheless, we have at least one advantage: the Rig Veda, considered to be the only existent earliest record of people in the Indian sub-continent.

Caste System
Scholarly consensus agrees on the point that the Aryan religion as practiced in the Rig Veda was simpler and devoid of the caste-system. In his History of India (1867), James Talboys Wheeler separated the Vedic age from the Brahminic age (also now called the Age of the Epics or the Puranic Age) and points out the following chief differences between the two:

In the Vedic period the Brahmins were scarcely known as a separate community; the caste system had not been introduced, and gods were worshipped who were subsequently superseded by deities of other names and other forms. In the Brahminic period the Brahmins had formed themselves into an exclusive ecclesiastical hierarchy, endowed with vast spiritual powers, to which even the haughtiest Rajas were compelled to bow. The caste system had been introduced in all its fulness, whilst the old Vedic gods were fast passing away from the memory of man, and giving place to the three leading Brahminical deities–Brahma, Vishnu, and Siva. Again, the Vedic period is characterized by a patriarchal simplicity, which is wanting in the Brahminic age, when the luxury and splendour of the Hindu Rajas had reached a climax side by side with the increased power and influence exercised by the Brahminical hierarchy.[4]

However, the 90th hymn “Purusha” of the 10th Book in the Rig Veda does mention castes in the following words:

But, many scholars consider the above text to have been interpolated by later protagonists of the Varna (caste) system. However, Dalit leader and architect of the Indian Constitution, B.R. Ambedkar, thought it untrue to a study of the Vedas to consider that the caste-system was absent from the Vedic age. However, he did try to point out that the fourth caste, Shudra (considered to be the lowest) was not original to the Vedic age, though texts such as the Purusha Sukta quoted above could have been tampered with by Brahmin priests of the latter period.

Ambedkar theorized that the Shudras originally belonged to the Kshatriya class and quotes Shanti Parva of Mahabharata 60.38-40 as a primary piece of evidence, where it says: “It has been heard by us that in days of old a Sudra of the name of Paijavana gave a Dakshina (in one of his sacrifices) consisting of a hundred thousand Purnapatras, according to the ordinance called Aindragni.” This mentioning of Paijavana in the text, however, was in order to give evidence from history of a Shudra who observed this rule that offering of sacrifices was mandatory for Shudras as well as it is for the upper castes. According to this rule, since the Shudra is not allowed to utter the mantras, he was to offer sacrifices called the Purnapatras without observing the vows laid down by the Vedas.[7] However, the very fact that these rules come later on and are requiring a citation of an example from the past seems to indicate that the Varna system as it came to be stipulated in this section of the Mahabharata was not prevalent during the Vedic age. In fact, according to K. M. Ganguli, translator of the Mahabharata in English (thus far the only complete translation):

The Santi Parva is a huge interpolation in the Mahabharata, in the genre known as 'wisdom literature.' The narrative progression is placed on hold almost from the first page. Instead we get a long and winding recapitulation of Brahmanic lore, including weighty treatises on topics such as kingcraft, metaphysics, cosmology, geography, and mythology. There are discussions of the Sankya and Yoga philosophical schools, and mentions of Buddhism. It is apparent that the Santi Parva was added to the Mahabharata at a later time than the main body of the epic.[8]

Widow Remarriage
Rig Veda 10.18 and Atharva Veda 18.3 have references to the widow during the time of funeral. There have been interpretations that saw these hymns as ratifying the custom of Sati (in which a widow was cremated alive with her dead husband). However, the interpretations are controversial owing to the obscurity of the text. Some have looked at these verses as a call to the widow to rise up from mourning and return to the world of life or resume her place in the world where battles are still to be fought.[9] In fact, it is suggested that it is the brother of the widow’s husband who raises his sister-in-law up with the words, “Rise up, woman, into the world of the living.”[10] The brothers and relatives seem to be pleading the widow to release her husband’s body for cremation. It is also suggested that the hymn also pronounces on the widow a blessing at her second marriage with the words in RV.10.18.9: “Go up O woman to the world of living; You stand by this one who is deceased; Come! to him who grasps your hand, Your second spouse (didhisu), You have now entered into the relationship Of wife and husband.”[11] The controversial nature of this passage will be evident from comparing it to Griffith’s translation of the same as “From his dead hand I take the bow be carried, that it may be our power and might and glory. There art thou, there; and here with noble heroes may we o’ercome all hosts that fight against us.”[12] Nevertheless, there is modern consensus on the interpretation that the Vedic texts only describe a form of mimetic death of the widow with her husband. She was wedded to him for life; but, on his death, she became dead to him and he to her, whereby she was expected to return to the world of the living, where she was free from her former husband, now to remarry another. This interpretation seems more in keeping with the ancient law-systems of the then world. For instance, the Code of Hammurabi (ca.2250 B.C.), states:

If a widow with small children has come to a decision to enter the house of a second man, she shall not enter without legal authority.
Before she enters the house of another man the judges will make decisions about the affairs in her first husband's house and entrust her first husband's household to that woman and her second husband, and they shall make them deposit a written statement.
They shall take care of the house and bring up the children.
They shall not sell the furniture for silver.
Anyone who buys the belongings of a widow's sons shall forfeit his silver.
The property shall return to its owner. (L177)[13]