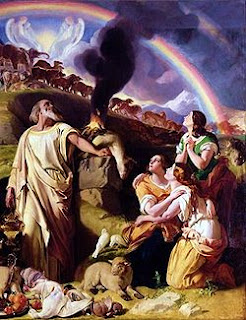 Tract Sanhedrin of the Babylonian Talmud lists the seven laws in the following words:

The rabbis taught: Seven commandments were given to the children of Noah, and they are: Concerning judges, blasphemy, idolatry, adultery, bloodshed, robbery, and that they must not eat of the member of a body while the animal is still alive.2

The view known as Noahidism builds its ideology on these. Six of the commandments were considered to have been Adamic: "(1) not to worship idols; (2) not to blaspheme the name of God; (3) to establish courts of justice; (4) not to kill; (5) not to commit adultery; and (6) not to rob". The seventh was added after the Flood: (7) not to eat flesh that had been cut from a living animal (Gen. 9:4)3

According to this view, it is obligatory for mankind everywhere to establish legal systems and courts (Law #3) in order to warn and judge people upon the basis of the 6 laws. Obviously, each of the basic laws needed to be interpreted into laws applicable for various crimes.

After the Holocaust, the title "Righteous Among the Nations", based upon the concept of "Righteous Gentiles", became an honorific given by the State of Israel to all those non-Jews who risked their lives during the Holocaust to save the Jews from extermination by the Nazis.4