4 Hindrances to Experiencing a Miracle 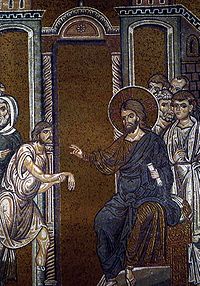 In Mark 3, we have the story of a man with a withered hand who was healed by Jesus. In contrast, there were people there who were not at all blessed by the miracle; but, instead grew worse after they saw what Jesus did. Let's look at four reasons why these people couldn't experience the miracle of Jesus in their lives:

1. Because of Their Critical Attitude
Mark says that "they watched Him closely, whether He would heal him on the Sabbath, so that they might accuse Him." (Mark 3:2).

They had a very critical, skeptical, and evil attitude towards Jesus. A negative mind is like the grave that is never satisfied; it is like the bottomless pit that can never have enough. Even if God would split the sun into two, a critical mind will not be able to say, "Yes, now I accept you Lord!" People with a critical mind cannot receive the miracle of God. That is why the Israelites who murmured perished in the wilderness; because though they had seen so many miracles, even to the extent that they saw the Shekinah glory dwelling in their midst and leading them on, they could not believe in God. God had to destroy them in the wilderness (Jude 1:5).

The best way in which we can see the strict orthodox view of the Sabbath is to remember that a strict Jew would not even defend his life on the Sabbath. In the wars of the Maccabees, when resistance broke out, some of the Jewish rebels took refuge in caves. The Syrian soldiers pursued them. Josephus, the Jewish historian, tells us that they gave them the chance to surrender and they would not, so "they fought against them on the Sabbath day, and they burned them as they were in caves, without resistance and without so much as stopping up the entrances of the caves. They refused to defend themselves on that day because they were not willing to break in upon the honour they owed to the Sabbath, even in such distress; for our law requires that we rest on that day." When Pompey, the Roman general, was besieging Jerusalem, the defenders took refuge in the Temple precincts. Pompey proceeded to build a mound which would overtop them and from which he might bombard them. He, knew the beliefs of the Jews and he built on the Sabbath day, and the Jews lifted not one hand to defend themselves or to hinder the building, although they knew that by their Sabbath inactivity they were signing their own death warrant. The Romans, who had compulsory military service, had in the end to exempt the Jews from army service because no strict Jew would fight on the Sabbath. The orthodox Jewish attitude to the Sabbath was completely rigid and unbending.

The Law is rigid and stiff; therefore, it cannot give life. God wants us to walk in the Spirit; not in the letter of the law. The letter kills bu the Spirit gives life (2Cor.3:6). A legalistic mind cannot accept the miracle of God. But, a legalistic mind is like a whitewashed tomb that is all white outside but has dead bones within. This is so because the very exaltation of law proves the hardened nature of the heart and its corruption by sin. The law was given to the Jews because of their hardness of heart (Matt.19:8); and, it was given to people who were by their actions unlawful and unrighteous (1Tim.1:9). The law didn't produce life for the Jews; it became a hindrance for them because they didn't treat it as a mirror that showed them their face (revealed their sin), but used it as a mask of hypocrisy.

Legalists try to put God in a box and say, "Well, miracles have ceased. God cannot do miracles," or "If you follow these steps, then you will automatically have a miracle". It is sinful to think that man can do things to compel God to act. Prayer and seeking God is not magic. One cannot place rules on God by looking to the letter of the law. The Jews did that. They had idolized Sabbath so much that they now saw Christ's act of miracle on Sabbath as proof enough that He was worthy to die.

3. Because of the Hardenness of Their Hearts
Jesus saw their hardened hearts and was angry with them. "And when He had looked around at them with anger, being grieved by the hardness of their hearts..." (Mark 3:5). Jesus had asked them a question which was very logical. If their heart was truly seeking to know the truth, they would have been able to learn the true meaning of Sabbath through this.

Then He said to them, "Is it lawful on the Sabbath to do good or to do evil, to save life or to kill?" But they kept silent. (Mark 3:4)

Their hearts were so hardened that they were no longer able to respond to the Word of God. When the heart has become like a hard rock, it cannot respond to any seed that falls on it. Such is the condition of those whose hearts have been hardened by traditions, by lusts, and by desire to disobey and disbelieve.

...because they did not receive the love of the truth, that they might be saved. And for this reason God will send them strong delusion, that they should believe the lie, that they all may be condemned who did not believe the truth but had pleasure in unrighteousness. (2Thess.2:10-12)

Now Enoch, the seventh from Adam, prophesied about these men also, saying, "Behold, the Lord comes with ten thousands of His saints, to execute judgment on all, to convict all who are ungodly among them of all their ungodly deeds which they have committed in an ungodly way, and of all the harsh things which ungodly sinners have spoken against Him." (Jude 1:14,15)

4. Because of Their Rebellious Disposition

And when He had looked around at them with anger, being grieved by the hardness of their hearts, He said to the man, "Stretch out your hand." And he stretched it out, and his hand was restored as whole as the other. Then the Pharisees went out and immediately plotted with the Herodians against Him, how they might destroy Him. (Mark 3:5,6)

Instead of accepting the miracle, they only turned against Him and immediately plotted with the Herodians (who were like gentiles to Jews), how they might destroy Jesus. Evil had blinded them so badly that they were willing to go to any extent (even if it meant a compromise of their beliefs) to get rid of Jesus. While one may say that such a disposition towards Christ doesn't exist among believers, the Bible does talk about those who confess God with their mouth but deny Him with their actions (Tit.1:16), who crucify Christ afresh (Heb.6:4-6), and who go in the way of Cain, run greedily in the error of Balaam for profit, and perish in the rebellion of Korah (Jude 1:11).

The Response of Miracle
However, the man with the withered hand received his miracle. There are not many reasons why he received his miracle. Chesterton once said that there are an infinite angles at which a man may fall but only one in which he stands. Similarly, there may be myriads of reasons why people don't receive God's miracles; but, there is just one why they receive (i.e. perceive and accept). We are told that when Jesus told this man to stretch his hand, he stretched it out, and his hand was restored as whole as the other. In other words, this man received his miracle because he obeyed Jesus.
Miracles Sermon Notes