The Paradox of Divine Faithfulness - Part 3 - Divine Immutability in Justice, Mercy, and Grace

There seems to be an apparent contradiction between the above two passages: the first tells us that God never regrets; the second, that He did. This again seems to conflict with the idea of immutability or the unchangeableness of God.

…the Father of lights, with whom there is no variation or shadow of turning. (James 1:17)

But, does historical information in the Bible contradict the idea of divine immutability? Well, 1Samuel 15 is not the only case we are told about divine repentance (or regret or change of action). Remember that we aren’t talking of ontological immutability here (i.e. as related to His being); we are talking here of moral immutability – that God is unchanging in His decisions and moral character. In the book of Jonah, we find again the issue of divine repentance. God wanted to destroy the Ninevites, but

“Then God saw their works, that they turned from their evil way; and God relented from the disaster that He had said He would bring upon them, and He did not do it.” (Jon.3:10)

In the case of Saul, the relenting of God is an act of Justice. Saul, by his action of disobedience, forfeited the promises of God.

In the case of Nineveh, the relenting of God is an act of Mercy. The Ninevites, through repentance, became subjects of the Mercy of God.

While Grace is more specifically the experience of saints in the New Testament because of the atoning work of Jesus Christ, divine favor and graciousness is not absent from the Old Testament. Favor, in the Old Testament, is more a disposition of God to do good to the one He is favorable towards. Jonah weaves all these attributes of God in this statement:

“I know that You are a gracious and merciful God, slow to anger and abundant in lovingkindness, One who relents from doing harm.” (Jonah 4:2)

At any cost, it is clear that we cannot demand mercy, we cannot demand grace. We only seek it. We can only demand something that we are worthy of. The laborers in the Vineyard had to be content with what the Master gave them. They had no right to demand why He gave the same to those who came later.

God’s explanation to Jonah is worth looking into:
“Then God said to Jonah, "Is it right for you to be angry about the plant?" And he said, "It is right for me to be angry, even to death!" But the LORD said, "You have had pity on the plant for which you have not labored, nor made it grow, which came up in a night and perished in a night. And should I not pity Nineveh, that great city, in which are more than one hundred and twenty thousand persons who cannot discern between their right hand and their left -- and much livestock?" (Jon.4:9-11)

Obviously, the justice of God related to His eternal moral order and law. The mercy of God related to His consideration of the people as persons. Jonah pitied the plant because he found it useful to him; he was angry because it died. From the perspective of mercy, the people of Nineveh were more valuable to God than the plant was to the selfish Jonah. Of course, the people didn’t provide a shade for God, but they were valuable for who they were. In this anger and pity of Jonah, and the response of God to him, we find a grand interweaving of the ideas of justice, mercy, and grace. Does it mean that God contradicts Himself? Does it mean that He is not actually immutable?

Of course not. It only means that God is just, merciful, and gracious and we must understand the immutability of God as not being limited by justice only but also extending in grace and mercy. It also means that God expects us to have a soft corner while not forgoing rigidness and discipline. We must remember that the same God who forgave the Ninevites was the One who struck Ananias and Sapphira to death in the New Testament. More importantly, we must not lose sight of the justice of God when we’re seeking His mercy. There is no mercy for those who lack the sense and appreciation for justice. The depth of our understanding of divine mercy is proportionate to the depth of our understanding of divine justice. 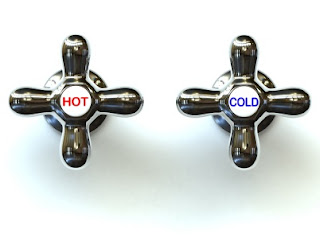 It is not the case that God changed His mind; however, it is the case that God’s character is immutable with regard to His justice and mercy. It’s like the tap which has a hot water knob and a cold water knob. The hot water and the cold water is there; however, it is up to us whether we let the hot water out or the cold water out. Similarly, the justice and mercy of God is unchanging. However, it is also true that not everybody receives mercy though mercy is for all; similarly, not everyone stays condemned though all deserve the judgment of God. Let’s look at some qualities of those who receive the judgment of God and do not receive the mercy of God. Then, we will look at the qualities of those who receive the mercy of God in their lives.

God is faithful in His justice and mercy. He does not show personal favoritism on any man (Gal.2:6). However, no man can also demand the mercy of God. It is His prerogative and sovereign determination. He has mercy on whom He wills (Rom.9:18). It is His to give equally to those who came later as to those who came first (Matt.20:14). There is nothing faithless and unlawful in what He does with His own things (Matt.20:13). However, one can choose to either be a vessel of mercy or vessel of destruction; it's up to the person. Evidently, one who stands and says "I am worthy of divine mercy" has no brokenheartedness and humility. He cannot be a vessel of mercy, but only of wrath. However, the one who bows down and cries out with a true repentant heart receives mercy. Thus, God is faithful in His mercies to help (Heb.4:16), to deliver (1Cor.10:13), to forgive and to cleanse us (1Jn.1:9).
Faithfulness Sermon Notes