The Call of Moses: The First Excuse (Exodus 3) 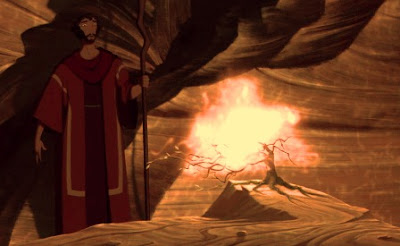 Exodus 3 and 4 record God's call of Moses to deliver the people of Israel and lead them into the Promised Land.

Hebrews 11:23 tells us that the parents of Moses were strong believers.

Hebrews 11:24-26 tells us that when the time came for Moses to choose, he "refused to be called the son of Pharaoh's daughter, choosing rather to suffer affliction with the people of God than to enjoy the passing pleasures of sin, esteeming the reproach of Christ greater riches than the treasures in Egypt; for he looked to the reward. (Heb 11:24-26)

In other words, Moses was a person who made a honest choice to follow Christ and His path of suffering. It is wrong to imagine that if Moses would have been patient and not killed the Egyptian he would have become the next Pharaoh. The Bible says that He actually made the choice to refuse to be called the son of Pharaoh's daughter. It seems that Egyptian politics was deeply tied with their polytheistic religion that in a way also deified, to some extent, the Pharaoh. It is possible that there came a point in Moses' life where identification with the palace meant identification with the Egyptian religion; therefore, he had to make a choice between Christ and Belial. His chose faith in Christ.

Moses was 40 when he fled Egypt. Moses was 80 when God called him.

It is interesting that in one of Moses' songs, he says that "The days of our lives are seventy years; And if by reason of strength they are eighty years" (Psa 90:10 NKJ). But, God called Moses when he was 80, i.e. the age when according to his own song, he was supposed to anticipate the end of life and entry into the grave. But, God's ways are above man's ways. Moses' life was not wasted while in preparation for God's work.

When God called Moses, he was still tending the sheep of his father-in-law. From human perspective, he was a very non-prospective person who was not able, in his lifetime, to move from tending someone else' flock to having his own flock. How can he, at age 80, still be tending the flock of his father-in-law! What dependency! Also, it doesn't seem at any case that his condition was going to improve. He still worked for someone and had no business of his own. Imagine that when we can look around and find young men and women in their twenties who have businesses or "ministries" of their own. But, nobody in the world imagined that God was preparing Moses to lead over 600,000 men, besides women and children out of Egypt into the Promised Land. God had designed him to lead an entire nation and pastor the biggest church in history. Also, did anyone know that Moses would lay the legal and doctrinal foundation of the nation of Israel. In process of time, whenever people would refer to the Law, they would refer to it as Moses. The Bible tells us that Moses was faithful in all his house (Heb.3:2).

Man judges by appearance, but God knows His plan for every child that comes into the world. Isn't it most beautiful to read that when Moses was born, his parents acted by faith to protect him because they saw that he was a beautiful child? (Heb.11:23). Only the eyes of faith can see the beauty that is truly beautiful in God's eyes.

So when the LORD saw that he turned aside to look, God called to him from the midst of the bush and said, "Moses, Moses!" And he said, "Here I am."
Then He said, "Do not draw near this place. Take your sandals off your feet, for the place where you stand is holy ground." (Exo 3:4-5 NKJ)

The first thing Moses encounters when He meets God is the holiness of God. The holiness of God becomes an important theme throughout the Bible, in a very special way, from this time forth. God is holy. His law is holy. His people are holy. His gives laws of holiness, instructions to build a holy tabernacle, instructions for a holy priesthood. Holiness is a theme that echoes through the prophets. Isaiah 6 talks about a vision of God's holiness that shatters the self-image of the prophet. It is impossible to be a servant of God, to serve God without first having a transforming encounter with the holiness of God. God is holy in His character, in His acts, in His word. A man who loses sight of God's holiness will fall from grace.

For if these things are yours and abound, you will be neither barren nor unfruitful in the knowledge of our Lord Jesus Christ. For he who lacks these things is shortsighted, even to blindness, and has forgotten that he was cleansed from his old sins. Therefore, brethren, be even more diligent to make your call and election sure, for if you do these things you will never stumble; for so an entrance will be supplied to you abundantly into the everlasting kingdom of our Lord and Savior Jesus Christ. (2Pe 1:8-11 NKJ)

God says to Moses:
"I have surely seen the oppression of My people who are in Egypt, and have heard their cry because of their taskmasters, for I know their sorrows. So I have come down to deliver them out of the hand of the Egyptians, and to bring them up from that land to a good and large land, to a land flowing with milk and honey, to the place of the Canaanites and the Hittites and the Amorites and the Perizzites and the Hivites and the Jebusites. Now therefore, behold, the cry of the children of Israel has come to Me, and I have also seen the oppression with which the Egyptians oppress them. Come now, therefore, and I will send you to Pharaoh that you may bring My people, the children of Israel, out of Egypt." (Exo 3:7-10 NKJ)

It is important for us to understand that God doesn't send His servant on His mission because the servant has great passion for souls; He sends because God has the passion for souls and the lost sheep belong to Him. Jonah had no desire to go to Nineveh. But, God sent him because God wanted Nineveh to be saved. We were all under the cloud of destruction, but God sent His only Son because He loved us. Moses doesn't seem to show any desire for this mission. He seems to have no passion at all. But, God calls him and sends him. It is because He has heard the cry of the people for deliverance. The eyes of mission must be focused on the Great Sender, the Author and Finisher of our Faith.

Moses does ask a genuine question, "Who am I..." He is a nobody in the worldly sense. He is no savior-metal. He is an old man. He may be at the point of death. And then, he is disconnected from the people of Israel for decades. He's just a small shepherd looking after his father-in-law's flock. Who was he?

It is interesting to see that God never tells Moses who he is. What we are and who we are doesn't determine God's calling. His calling determines who we are. It is wrong to count our background, abilities, talents, prowess, intelligence, or whatever in the matter of divine calling. He doesn't call us because of who we are. His calling gives us the identity.

God's answer is simple: "I will certainly be with you. And this shall be a sign to you that I have sent you: When you have brought the people out of Egypt, you shall serve God on this mountain." (Exo 3:12)

God doesn't tell Moses, "Have you forgotten all your training in Egypt? You are Moses, the one taken out of water. You are that Moses who was learned in all the wisdom of the Egyptians, and was mighty in words and deeds. (Act 7:22) Not just that, you have the experience of this wilderness. There is none like you. You cannot see what you have in you. But, I can see the greatness that is in you. I can see the deliverer that is in you. Know yourself!"

Familiar with this? This is the gospel of false self-confidence. We see social media bombarded with these statements all the time: "Greatness that is in you" "Have confidence in yourself" "Believe in yourself". G.K. Chesterton once said that those who have strong self-confidence are usually found in a mental asylum. God is not interested in building the false self-confidence of Moses. God's call of Moses is not based on the training of Moses, the skills of Moses, the education of Moses, the connections of Moses. He is not called to rely on them. They all are fallible. God's call of Moses is based on God Himself, "I will certainly be with you...."

Isn't this beautiful? This is the only valid NT identity. God with us! Emmanuel.

"How God anointed Jesus of Nazareth with the Holy Spirit and with power, who went about doing good and healing all who were oppressed by the devil, for God was with Him. (Act 10:38, bold emphasis mine)

The first excuse of Moses was "Who am I?"
God's answer is "I will certainly be with you."

Mission is not about me and my skills and abilities. Mission is about God's presence in the world in redemptive action.
Labels: Calling Exodus Missions Moses