Angels at Prayer - Some Witnesses

Incident 1: Place – Makhu, Punjab
In 1994, Pastor Surinder of Makhu, a genuine man of God whose life and ministry I personally witnessed, told us an incident from his life. He had the practice of kneeling by a chair and praying every morning or during any part of the day when he got any free time. There were two chairs there besides a bed in that single room where he and his family lived. And, because they didn’t have any church building then, people would bring the sick and demon-oppressed for prayers there. On Sundays, they would pull up a tent for the 600-800 people who joined the services. Once, Pastor Surinder was on a mission trip. His mom was sleeping on the bed at night. Sometime during the night, she awoke and was terrified by what she saw. She saw two persons kneeling by those chairs that were at the foot of the bed. When they saw her terrified, they rose up and came to her and asked why she was so afraid. They said that they come here to pray because her son used to kneel here and pray everyday and today was out somewhere ministering.

Incident Two: Place – Sanjaynagar, MP
Back in the 90s, we were once having a prayer time in the church building. There were only around 10 of us sitting in a semicircle and praying. Suddenly, my cousin Benny (around 4-5) shrank close to his mom all terrified. When his mom asked him what had happened, he said that while we were praying a shining being in white suddenly swept by my side. No one else but he saw this vision.

Then an angel appeared to Him from heaven, strengthening Him.  And being in agony, He prayed more earnestly… (Luk 22:43-44) 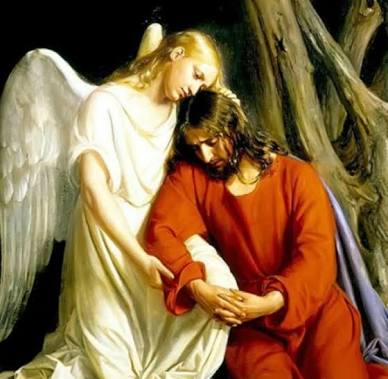