The thief comes only to steal and kill and destroy; I have come that they may have life, and have it to the full. “I am the good shepherd. The good shepherd lays down his life for the sheep. The hired hand is not the shepherd who owns the sheep. So when he sees the wolf coming, he abandons the sheep and runs away. Then the wolf attacks the flock and scatters it….”  (John 10:10-12)

Recent studies in sheep psychology have increasingly proven that sheep are not dumb animals as popularly supposed; rather, they are intelligent, individualistic, and social animals that exhibit advanced face recognition abilities, emotional understanding, and individual traits along with group protection herd skills. Studies show that sheep emotion can be ascertained from the position of their ears; for instance, when afraid, the ears of the sheep move from their normal horizontal position towards the back; when angry, their ears would go straight up; when surprised, one ear might go up and another down. Sheep can also distinguish between pictures of calm faced sheep and tensed sheep. Researchers have shown that sheep experience despair when facing uncertain, unpredictable, and unfamiliar situations. On the unusually dark and thunderous night of November 3, 1888 England experienced a bizarre event when tens of thousands of sheep panicked, jumped their hurdles and the next morning were found scattered over miles. Being prey animals, sheep possess not only complex vigilance faculties, but also emotional mechanisms that assist them in determining if a situation is safe or dangerous. The presence of a predator like a wolf, therefore, creates a severely antagonistic environment driving the sheep into a flight of frenzy and seeking band protection, which is usually explained using the selfish-herd theory.

The selfish-herd theory states that prey animals, on perceiving danger, tend to move to the centre of a flock to avoid becoming open targets of a predator. The behavior is termed selfish because the animal uses another co-animal as a shield against the predator, thus minimizing threat to itself. The theory has been corroborated by experiments and is useful in using shepherd dogs to drive sheep. The sheep perceive the dogs as danger and herd together to create protective bands. The dogs can then drive them in a particular direction. Quite contrary to this picture, Christ is not portrayed as one who drives the sheep (as by danger, making use of a probably selfish disposition), but one who leads the sheep. Christ the Shepherd is the familiar person, who feeds the sheep; other sheep see the Shepherd feeding the sheep and happily (not frenziedly) move towards Him. Sheep are smart; if they know that a shepherd is not feeding any grain, they will leave. Sheep are scared by the wolf; but they move towards the Good Shepherd.

A lot of study has been done on wolf’s hunting methods. Contrary to many other predators, wolves do not necessarily hunt down preys by outchasing them, e.g., as a cheetah does. Instead, a wolf pack may calmly trail and stalk its prey or a herd for miles before it ascertains the right moment and the target to attack. Wolves usually single out the weak, injured, and sick ones and attack by ambushing them making any escape almost impossible. Wolves exhibit great patience and perseverance in stalking behavior. They are opportunists. They wait for the right moment and are willing to go hungry for days until they sense the right opportunity to strike. After a successful hunt, a wolf can eat up to 20 pounds of meat per feed. Jesus offered at least two analogies of how wolf-like thieves may attack the flock.

The first is found here in John 10: 12, where He talks about a shepherdless flock that is attacked by the wolf. The hired worker who was assigned to watch after the sheep saw the wolf coming and fled for his life. He was never a real shepherd. He was just a paid worker, who may be fond of some sheep, but not willing to risk his life to save the sheep. He was able to see the wolf for sure, but instead of staying with the sheep and guarding them, he chose to abandon them and leave them exposed to immediate danger. But, why did the hiredworker not flee to the centre of the flock if he wanted to really protect himself? That is what the sheep would do, right? Why did he abandon them and run away?

I suspect if the sheep would ever herd around the hireling. Probably, they would not trust him either. When facing danger, they would rather flock together with their familiar friends, to what their instincts reliably point to, than flock around a hireling that they never bonded to in the first place. He was meant to be at the exterior, exposed to the threat anyway, and not the one at the protective centre. A guardian who uses the ones he is supposed to guard as his guard is a contradiction in terms. He is like the soldier who uses his fellow countrymen as human shields against enemy attack – the very countrymen he was appointed to protect. A true shepherd, on the other hand, stands at the battlefront. One good picture of such is found in Nehemiah 4 and 6, where Nehemiah not only put himself in front of the people in the battlefront, but also exhibited real courage and fearlessness in the face of enemy threat. A true shepherd does not seek his own but the things of Christ, the Chief Shepherd (Phil.2: 21).

The hireling flees because the sheep are not his own. Pastors are not hirelings. They are shepherds (Eph.4:11). They are not paid workers, but bond-slaves of Christ. They recognize that they are primarily themselves the sheep of Christ, who are appointed to feed Christ’s sheep (John 21:17). An interesting characteristic of sheep is that they move towards a sheep that is following a familiar person (friend) who is feeding it. This is an instinct that shepherds utilize to lead a flock of sheep with the help of one sheep that the other sheep move towards. The pastor is someone like that sheep. He can say with Paul “Follow my example, as I follow the example of Christ” (1Cor.11:1). Jesus never appoints any hireling over His sheep. There are really no hirelings in the Body of Christ. In John 10, Jesus tells His disciples that He is not a hireling, but the Good Shepherd who gives His life for the sheep. Since the Shepherd is always with the sheep, it is not possible for the wolves to attack them in the natural wolf-like pattern. So, wolves attack the believing flock using a different strategy.

The wolf is anyone who decerns the sheep and intentionally wishes to steal, kill, and destroy them. The arch-wolf is Satan and his team of emissaries who masquerade as apostles, the devil himself masquerading as an angel of light (2 Cor.11:13,14). Jesus said that these ferocious wolves come to the sheep in sheep’s clothing (Matt.7:15).

Shepherds today use two kinds of dogs to assist in shepherding: herding dogs and guardian dogs. Herding dogs appear like predators to the sheep forcing them into protective group behavior. Guardian dogs, on the other hand, grow up with the sheep and get bonded with them, living with them, and acting as instinctive guardians against predators. Some guardian dogs very much resemble their fellow sheep. 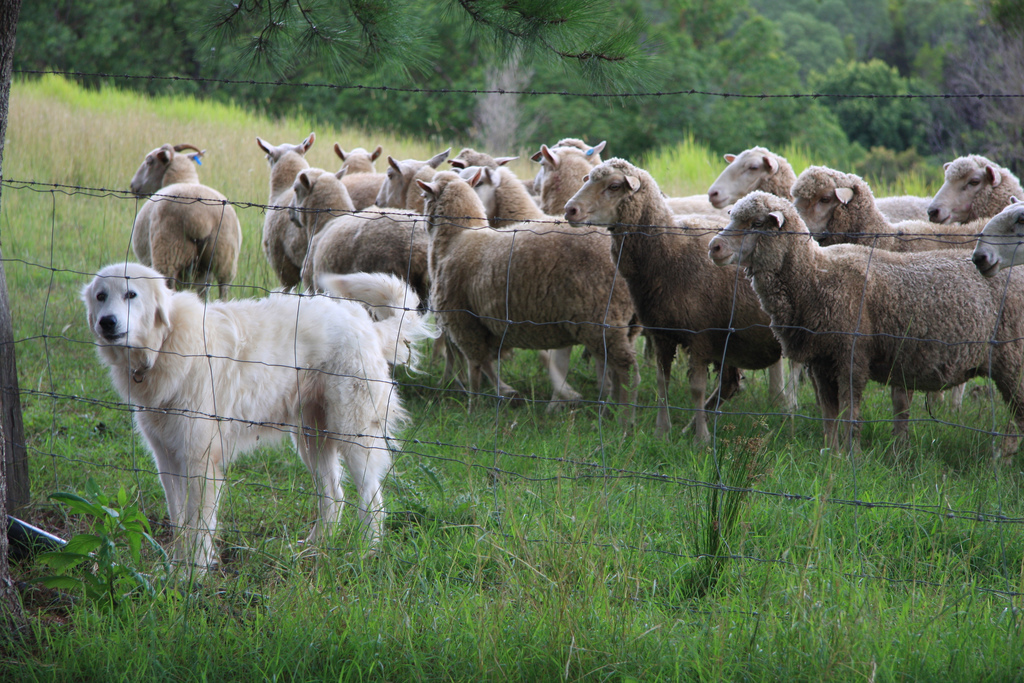 Wouldn’t it be very dangerous if these guardian dogs were internally ferocious wolves seeking the right opportunity to devour the sheep? Such is the evil Jesus warned of when He cautioned us about wolves in sheep’s clothing.

A wolf in sheep’s clothing has no straightforward technique. He never comes in by the gate but intrudes through some other way (John 10:1,2). He is a thief and a robber because his goal is to steal, kill, and to destroy (John 10:10). He wants to steal away the sheep from the true Gospel to a false one (Gal.1:6,7). He prowls, stealthy and opportunistic, like a roaring lion seeking to devour, kill, and destroy (1Pet.5:8).

But there is good news. The sheep can resist the adversary by standing firm in faith (1Pet.5:9). This is because the sheep follow their Shepherd and know His voice; they will never follow a stranger but will run away from him – they do not recognize the stranger’s voice (John 10:5). In fact, the Shepherd gives them eternal life, and they shall never perish; no one will snatch them out of His hand (John 10:28).

But that does not mean that the sheep should stop being vigilant. The New Testament repeatedly cautions us to be alert, watchful, and sober minded (1Pet.5:8; 2Cor.16:13; Col.4:2; Rev.3:2; 1Thess.5:6). Sheep by nature are constantly vigilant animals; so must believers be; especially, because the enemy of our souls does not come like a menacing pride of lions but like an innocuous looking pack of wolves in sheep’s clothing. The Early Church faced such situations and the apostles repeatedly cautioned believers in the epistles. While it is true that no one can snatch the sheep out of His hand, the Bible warns believers to watch out lest they themselves drift away from faith (Heb.2:2). Paul told us that he did not think he had arrived but that he ran towards the goal of the upward calling in Christ to attain the resurrection from the dead (Phil.3:10-14).

Christ came that we may have life and life more abundantly. Obviously, He was not referring to this present life, but to life eternal which He gives to His sheep. He gives it to them by laying down His life for them and by rising again (John 10:17,18). But does it mean that the sheep had no life before the Shepherd gave them life? If so, how would they be His sheep?

Here, we are reminded of a crucial tenet of the Gospel faith – the revelation of divine foreknowledge and of predestination. God not only foreknew His sheep but also predestined them unto salvation, to be conformed to the image of His Son both in sanctification and glorification (Eph.1:11; Rom.8:29,30). Therefore, they are His eternally, even before they are born on this earth. He knows them intimately and eternally. He knows them better than they know themselves.

This realization gives us great hope. We do not need to be like that sheep that are driven by despair and confusion due to extreme darkness, danger, uncertainty, and the unknown. The Shepherd is with us. The Shepherd suffers with us. The Shepherd suffers for us. The Shepherd knows what we are going through, but also guarantees us what will happen in the end. He is the source of life to us. He is also the source of courage in times of suffering. He does not put us under hirelings. His Spirit in us is His presence in us to teach, to guide, to strengthen, to ward against evil, and to transform us into His image. But His sheep are not dumb creatures propelled by mere herd-mentality, going with the crowd. They are intelligent, individualistic, and live as a community – they are one.  The adversary prowls like a roaring lion ready to devour the weak and unstable. The sheep of Christ are not driven by any selfish-instinct; rather, they reach out to protect and save the weak by bringing them into the centre. They bear each other’s burden. They love each other as the Shepherd loved them, not merely as they love themselves (John 15:12).