Why Was Jesus Baptized by John? 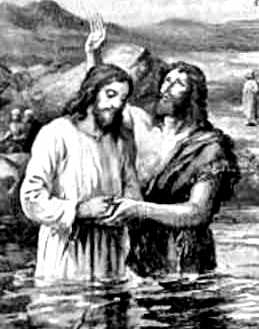 Then Jesus came from Galilee to John at the Jordan to be baptized by him.
And John tried to prevent Him, saying, "I need to be baptized by You, and are You coming to me?"
But Jesus answered and said to him, "Permit it to be so now, for thus it is fitting for us to fulfill all righteousness." Then he allowed Him. (Mat 3:13-15 NKJ)

The Baptism of Jesus Was

1. NOT Anointing of Jesus for the Office of Priest, Prophet, or King. Christ is the Anointed One, and His Anointing is eternal. He is the Anointer.
2. NOT identification with sinful humanity as if Jesus were being baptized in the same manner as others--not, at all. Jesus identified with humanity by partaking of human nature in His Incarnation. John didn’t baptize Him with the baptism of repentance like he baptized others. In fact, John recognized Jesus as the Lamb who takes away the sin of the world (Jn.1:29); in other words, it was not the waters of baptism but the Lamb who saves us from our sins.

To fulfill all righteousness (Matt.3:15). Not for the remission of sins but for the fulfillment of all righteousness; in other words, in order to finish the work of the Kingdom of God, for the Kingdom and righteousness are inseparable. John confessed that he needed to be baptized by Jesus (for the remission of sins); but, Jesus indicated that His baptism was in order to fulfill all righteousness. The work of righteousness is the dispensational work of God in human history. It is the work of the Kingdom and is also known as the Mystery of Godliness (1Tim.3:16). Its opposite is the unrighteousness, darkness, and disobedience (the Mystery of Iniquity) that characterizes the kingdom of the Satan whose anti-christ is known as the man of sin or the lawless one--unrighteous deception marks the reign of the devil (2Thess.2:7-12).

1. PROPHETIC IDENTIFICATION & TESTIMONY. The Baptism by John Sealed Old Testament Prophecy of Jesus. In fact, all the Law and Prophets bore testimony to Jesus (Heb.1:1,2; 1Pet.1:11) and the testimony of Jesus is the spirit of prophecy (Rev.19:10). The Law and the Prophets prophesied until John (Matt.11:13). In other words, John was the last of the Old Testament line of prophets. He was the last of the OT Prophets to bear testimony of Jesus. John was distinct in that he personally bore witness of Jesus by identifying Him as the Messiah. By being baptized by John, Jesus not only recognized the baptism of John as authoritative but also sealed up Old Testament prophecy as fulfilled in Him (Matt.5:17). As the Forerunner of Jesus, John’s prophetic testimony was crucial.

2. DISPENSATIONAL DIVISION. The Baptism of Jesus by John also marked the fading of the Old and the beginning of the New. Thus, later John will say, "He must increase, but I must decrease. (Jn.3:30). The advent of Christ was the advent of the Kingdom and Jesus remarked later that “among those born of women there has not risen one greater than John the Baptist; but he who is least in the kingdom of heaven is greater than he. And from the days of John the Baptist until now the kingdom of heaven suffers violence, and the violent take it by force.” (Mat 11:11-12). John rejoices as the friend of the Bridegroom and (though spiritually member of Christ's Church, yet dispensationally-i.e. in relation to historical timeline) distinguishes himself from the Bride, i.e. the Church. The Baptism did two things:
a. It revealed Christ to Israel. In fact, John came baptizing in order for Jesus to be revealed to Israel (John 1:31).
b. It divinely confirmed Christ’s messiahship through the sign of the descent of the Spirit on Him and the voice from heaven that announced, “This is my beloved Son in whom I am well pleased” (Matt.3:17).

It seems there were two stages of confirmation for John the Baptist about the identity of Jesus:
1. He knew that Jesus was Christ when Christ came to him and so said that it was he who needed to be baptized. Then, upon baptism when the Spirit descended on Christ, it was the fulfillment of a sign given to him. “And John bore witness, saying, "I saw the Spirit descending from heaven like a dove, and He remained upon Him. I did not know Him, but He who sent me to baptize with water said to me, `Upon whom you see the Spirit descending, and remaining on Him, this is He who baptizes with the Holy Spirit.’ And I have seen and testified that this is the Son of God."(Jn. 1:32-34 NKJ)
2. When John was in prison, he sent his disciples to seek confirmation and Jesus told them (obviously hinting to Isaiah 61:1,2) "Go and tell John the things which you hear and see: The blind see and the lame walk; the lepers are cleansed and the deaf hear; the dead are raised up and the poor have the gospel preached to them. (Mat 11:4-5). This second episode possibly seeks to confirm to John’s disciples while he was in prison that John was himself also awaiting the coming of Christ and His coming meant that the mission of John was over. It marked the end of the Old and the beginning of the New.