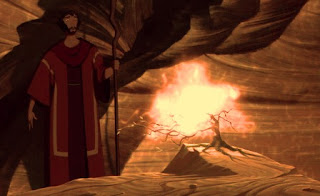 Moses' second question also includes the concern about the "How" of doing this mission.

Then Moses said to God, "Indeed, when I come to the children of Israel and say to them,`The God of your fathers has sent me to you,' and they say to me,`What is His name?' what shall I say to them?" (Exo 3:13)

He is already calculating the possible problems aforehand, which is not bad. Moses' question button turns on God's light on His plan of redemption. God tells him what he has to tell the elders and what they should do, how they should meet the Pharaoh, how he would refuse to let the people of Israel go, and then how God would bring them out.

Usually, the man or woman called to divine mission knows what the mission really is all about. However, not all of us have an idea of the divine plan. Sometimes, God shows us the entire plan at a glimpse. Sometimes, He leads us step by step. But, nevertheless, it is His desire to show to us His plan rather for us to design our own. God was certainly not going to leave Moses on his own to execute the divine commission. God was going to go with him, not like a co-traveler, but as the Leader and the Pilot.

What is God's immediate plan for the present mission? This is an important question to ask and seek God for. At this moment, God has not yet shown to Moses the plan of the Tabernacle or the plans related to entering the Promised Land. He is only giving to him a glimpse of His immediate plan of bringing out the Israelites out of Egypt. God may not always give us the entire plan for mission; He guides us step by step. But, He never leaves us without instructions.

By now, Moses' concerns regarding the mission should have come to end. But, they don't as we can see in the next chapter. He still has fears and doubts, which God will go on to remove through certain signs that prove the supremacy of God's power over all things that we consider to be our staff, support, and security (his rod and his hand). But, at this moment, God makes sure to comfort Moses with the assurance of His divine plan. Moses doesn't need to worry "how" this mission will be accomplished, because the Master knows "how" to use His vessel and "how" to accomplish His purposes. He is the Authority in charge. He HAS the plan.

We see the following ingredients of the Divine Plan:
1. Team Reaching and Team Building. Go and Gather the Elders Together (Exo.3:16).
There are three sub-steps to this:
A. Identify the Family (Jesus identified that the first to be reached were the Jews, His own in genealogical terms).
B. Recognize and Reach the Leadership Structure. Moses had to go to the elders. (Jesus preached mainly in the synagogues. The disciples also began with synagogues. Similarly, Jesus understood the importance of raising elders; so, He chose disciples at the very beginning of ministry, even before He did His first miracle; Paul always usually started with preaching at synagogues and connected with local elders and believers).
C. Gather together. Build a team.

2. Communication and Discipleship. Say to Them (Exo.3:16).
Moses had to communicate to the elders what God had communicated to him.
Jesus taught His disciples to teach others what He taught them. Paul's commission to Timothy was the same regarding the words of Christ: "And the things that you have heard from me among many witnesses, commit these to faithful men who will be able to teach others also." (2Ti 2:2). Jesus could pray in His priestly prayer: "I have given to them the words which You have given Me; and they have received them, and have known surely that I came forth from You; and they have believed that You sent Me." (Joh 17:8). Communication is vital to the work of the Father.

3. Respecting the Local Principality and Government. Communicate to Pharaoh. (Exo.3:18).
This cannot be ignored. God didn't bypass the local authority and system. It was important for God that Pharaoh let the people go. But, God doesn't compromise with Pharaoh. God communicates and strikes Pharaoh for disobedience. Pharaoh has to recognize that there is a government above his government. However, the church is not allowed to disrespect or challenge this authority.

Mission is not against contextual authority legitimized by God (Rom.13:1-8). Mission is not even anti-cultural. However, where any context is openly in disobedience to divine authority, the presence of mission poses a challenge to it and God's deliverance of people brings them out of the power of such oppressive structures. For instance, Christians in India who have really experienced divine deliverance are also delivered out of the evil caste-system that is the contextual oppressive element of Hindu cultural authority. However, Christians who wish to remain in the caste-system and follow it are self-deceived. At the same time, the Gospel never disrespects authority structures given by God, and such that have legitimate authority in a political or cultural context. Therefore, even Christ was not crucified without going through Jewish, Judaen, and Roman tribunals. The same holds also for principalities and powers in the heavenly places. "Yet Michael the archangel, in contending with the devil, when he disputed about the body of Moses, dared not bring against him a reviling accusation, but said, "The Lord rebuke you!" (Jud 1:9 NKJ)

4. Understanding the World's Response. Pharaoh would not want to let the people go  (Exod.3:19).
The world wants to remain godless and keep the people of God as its slaves. Therefore, Jesus said we cannot serve God and mammon. Jesus also reminded His disciples that the world will be against them as it is against Him (Joh 15:18-25). There cannot be friendship between the world and God. The world-system cannot be "transformed"; it refuses to be changed. God wants to save His people out of it. God doesn't save the world-system. Babylon will burn in fire (Rev.18)

6. I will give this people favor (Exod.3: 21). Connections of Favor.
However, there will also be people who will be friends of God's people. God will give favor for His purposes. We have the examples of Nehemiah, Esther, Jeremiah, Daniel, Paul and many others who were given favor with kings, princes, and leaders so that the work of the Lord could be done.

7. God will plunder the world to supply His children (Exod. 3:22). Provisions.
It doesn't mean that the Egyptians who gave would be plundered. In fact, they were giving out of favor. However, it symbolizes a plunder of the Egyptian economy as a whole, since gold and silver were being taken away out of the economy. This shows the supremacy of divine sovereignty over even world economy. The Anti-Christ will try to hijack this economy by introducing the seal (666) in connection with false worship. However, it will only end in self-destruction. God's work will never lack provision. Even the enemy cannot withhold anything from God. He is sovereign.
Luke 22:35. And he said to them, When I sent you out with no moneybag or knapsack or sandals, did you lack anything? They said, Nothing.
Acts 3:6. But Peter said, I have no silver and gold, but what I do have I give to you. In the name of Jesus Christ of Nazareth, rise up and walk!
God's working power is greater than human means.
Labels: Bible Studies Missions Moses