The Sword of Joshua 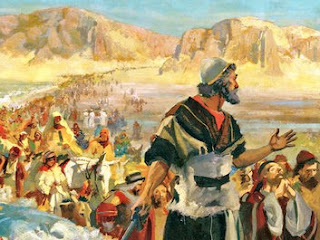 The sword of Joshua against the Canaanites was judgment by means of sword. Jeremiah and Ezekiel prophesied that Israel itself (who was once used by God to bring justice by sword) would be punished by the sword, plague, and famine.

Jeremiah 24:10 - I will send the sword, famine and plague against them until they are destroyed from the land I gave to them and their ancestors.

The sword is symbolic of political authority instituted by God.

Romans 13:3-4 For rulers are not a terror to good works, but to evil. Do you want to be unafraid of the authority? Do what is good, and you will have praise from the same. For he is God’s minister to you for good. But if you do evil, be afraid; for he does not bear the sword in vain; for he is God’s minister, an avenger to execute wrath on him who practices evil.