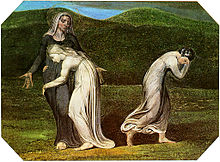 But Ruth said: "Entreat me not to leave you, Or to turn back from following after you; For wherever you go, I will go; And wherever you lodge, I will lodge; Your people shall be my people, And your God, my God.Where you die, I will die, And there will I be buried. The LORD do so to me, and more also, If anything but death parts you and me." (Ruth 1:16-17)

WHAT HER CHOICE WAS
1. Her choice was spiritual. (She chose not to return like Orpah "to her gods" (Ruth 1:15), but to follow Naomi so that Naomi's God would be her God (Ruth 1:16)).
2. Her choice was submissive, by faith. (She submitted to YHWH. "YHWH do so to me, and more also, if anything but death parts you and me". She based her commitment on her faith in the Lordship of YHWH, which meant also her rejection of false gods)
3. Her choice was sagacious. (She was aware that YHWH was the God of Israel, and it was in Israel that she could be free to worship and serve Him. She wanted to be with the person and the people that worshiped the living God).
4. Her choice was single-minded and unwavering. (She was not deterred by the negative attitude of Naomi towards YHWH. Her faith in YHWH was not dependent on situations and happenings. She could have utilitarianistically reasoned that her misfortune was due to her marriage into this YHWH serving family. However, she did not blame God for anything, but was unshakeably determined to be part of the YHWH serving community)

*God's proper name YHWH has been used here to distinguish the LORD from the pagan deities that were served by nations surrounding Israel.
Labels: Choices Ruth Sermon Notes