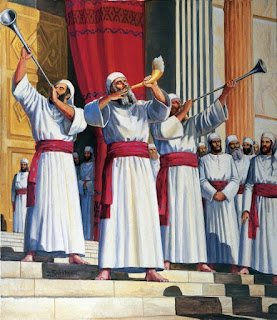 Judges 21 recounts the story of how the children of Israel provided wives for the surviving Benjamite males.

An important episode is the gathering of the entire assembly before the Lord at Mizpeh for worship, prayer, and communion.

Since, by an act of vengeance, the whole tribe of Benjamin was destroyed except a few remaining, the Israelites felt it morally obligatory to ensure that the Benjamite tribe survived through posterity. However, they had made an oath saying, "There shall not any of us give his daughter unto Benjamin to wife." Consequently, their obligation towards the oath clashed with their obligation towards Israel (that by doing the former, they risked losing one tribe of Israel). Therefore, they decided to first find a tribe that had not been represented at the assembly before the Lord at Mizpeh. They found that Jabeshgilead was not represented. For the Israelites, this was a capital crime. It was unforgivable to ignore the national assembly before the Lord. So, they sent 12000 warriors to destroy Jabeshgilead, but bring alive all virgins they found there. The warriors did so and found 400 virgins, who were then given to the Benjamite males as wives. However, there still was a shortage. Then, the following episode takes place:


And they said, There must be an inheritance for the survivors of Benjamin, that a tribe not be blotted out from Israel. Yet we cannot give them wives from our daughters.¨ For the people of Israel had sworn, Cursed be he who gives a wife to Benjamin.¨ So they said, Behold, there is the yearly feast of the LORD at Shiloh, which is north of Bethel, on the east of the highway that goes up from Bethel to Shechem, and south of Lebonah.¨ And they commanded the people of Benjamin, saying, Go and lie in ambush in the vineyards and watch. If the daughters of Shiloh come out to dance in the dances, then come out of the vineyards and snatch each man his wife from the daughters of Shiloh, and go to the land of Benjamin. And when their fathers or their brothers come to complain to us, we will say to them, Grant them graciously to us, because we did not take for each man of them his wife in battle, neither did you give them to them, else you would now be guilty.¨ And the people of Benjamin did so and took their wives, according to their number, from the dancers whom they carried off. Then they went and returned to their inheritance and rebuilt the towns and lived in them. And the people of Israel departed from there at that time, every man to his tribe and family, and they went out from there every man to his inheritance. (Jdg 21:17-24)

The Israelites adopted a round-about tactic to ensure that their oath remained unbroken while the Benjamites also got their wives. The tactic was to create a situation that would make it legitimate for the Benjamites to steal for themselves wives, without the Israelites incurring the guilt of GIVING them women as wives. There are two things to note about this round-about tactic:
In summary, the pre-monarchial community was able to solve a conflict of ethics situation successfully without any of them incurring any guilt for the same.
Labels: Bible Studies Conflicting morals Ethics Judges 21