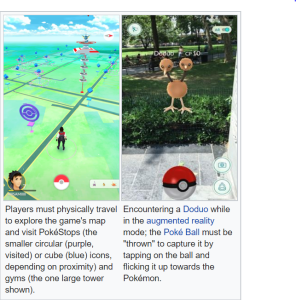 We observed this evening around 15-20 people crowded in a place to catch a Pokémon. Seems like Pokémon Go, invented by Japanese company Nintendo, was successful in bringing the game lovers to this location. The game has already been lauded by some for contributing towards combining virtual game framework with physical activity in real locations. The term used is "augmented reality"--one has to find the pokémon, invisible in the real world but visible in the virtual world of the game, in real locations. Some think a game that augments by inviting physical activity is much better than video games that are sedentary in nature. But, there have been incidents when game players were so focused on the phone while walking to catch a Pokémon that they weren't aware of speeding vehicles. The website provides some cautionary guidance:

* When you’re out and about playing Pokémon GO, stay aware of your surroundings at all times—especially when traveling alone...
* To make sure you and those around you are safe, do not play Pokémon GO while riding a bike...
* If a Pokémon appears in an inaccessible location, or in a place where it might not be safe to approach it (for example, on a construction site or on private property), do not try to catch it...
* When using the camera function in Pokémon GO, make sure everyone in the photo is OK with having their picture taken and that there isn’t anything personal in the photo that you wouldn’t want to share.

About a year ago, someone asked me if this game wasn't demonic in nature. People were going to find "ghostlike" characters that could not be detected without the use of the game app. Of course, the pokémons are not demon spirits. However, there certainly are concerns with regard to both the concept and the content of the game. A year ago Michael Snyder in Charisma News addressed some of the concerns:

Nintendo is now worth billions of dollars more than it used to be. But is there a dark side to Pokemon Go? Is it potentially evil, dangerous or demonic?

Many people would dismiss such questions as complete nonsense. Unlike most video games, Pokemon Go actually requires people to leave their homes, get some exercise and visit real places. This type of game is being called "augmented reality," and it is bringing people together in new and interesting ways. In fact, the Washington Post is reporting that a lot of people are actually ending up in church as they hunt Pokemon creatures....

However, he also hinted that the content of the game could encourage active interest in occultic themes and evolutionary ideas:

But much more alarming to many is the content of the game itself. As Mena Lee Grebin has pointed out, "Pokemon" actually comes from two Japanese words that mean "Pocket Monster"...

Even the Washington Post admits that there are creatures such as "a flaming demon" in Pokemon Go. As players progress through the game, they collect these monsters and demons, train them, and have them fight against Pokemon owned by others. Here is more from Ricky Scaparo...

The Pokemon are supposed to be "monsters" that have special powers and share the world with humans. The idea of the game is to have the children learn how to collect as many Pokemon as possible, train them, and use them against other people's Pokemon by invoking the various abilities of each Pokemon creature. Pokemon can evolve and pass through various levels, 100 being the highest. Colored energy cards are sometimes used to aid the Pokemon....

According to occult expert Bill Schnoebelen, Pokemon players engage in all sorts of activities that would be considered deeply occult if they were done in real life...

Like many video games, Pokémon is riddled with occult concepts. Concepts like "magical stones," teleportation, ghosts, all-seeing eye, psychic power and using spirits to achieve results in the real world are all givens in this game realm. All of this is contrary to scripture. The Pokémon games and comics, etc., teach what I have called a magic worldview that is completely opposed to the Bible.....

Of course, Michael concluded that though others may have reasons to play the game, it is not for him.

Adam Holz in Focus on the Family suggests a not-forbidden-but-watch approach:

Pokémon's overarching worldview is a magical, vaguely Eastern-inspired one paired with nods to evolution (creatures can, essentially, become bigger, better versions of themselves throughout the game). That worldview is definitely one that parents of young fans should be aware of and talk about, especially if Pokémon Go spurs interest in diving deeper into the myriad other Pokémon video games, TV shows, movies and trading cards out there.....

Pokémon Go offers families an opportunity for exercise and relationship … but only if we pay attention together to wise boundaries and guard against becoming so engrossed in an imaginary world that we lose sight of the real one.

But, Matt Slick at CARM wonders if the game is even safe to be given entry into Christian homes:

I do not see how allowing children to play with games that encourage fighting, reading of minds, use of poison, mimicry, taunting, teleportation, hypnosis, and evolution can be a good thing.  This is not training a child to righteousness. It is accepting the occult and secular evolution.  Is this what we, as Christians, want our children to meditate on?  Of course not.

If children are conditioned to accept these things in youth, then they will be more likely to accept these ideas in adulthood.  This leads people away from God's word and truth, not toward it.  This is dangerous to a person's eternal destiny.

For those believers who wish to know for themselves if they should be playing this game or any other game, I recommend the following questions to ponder upon:

1. Why do I want to play this game?
2. What makes this game interesting to me?
3. How does it help me redeem my time for the days are evil?
4. Can I be filled with the Spirit and praise God making melody in my heart as I play this game?
5. Can I do whatever I do, I do to please Christ when I play this game?
6. Does this game help me to ponder on what is true, noble, right, pure, lovely, admirable, excellent or praiseworthy? (Phil 4:8)
7. Can I be better without this game?
Labels: Current Issues entertainment games Pokemon