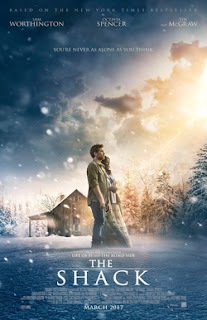 There are a number of Christian movies that have tried to tackle the issue of human suffering in the face of faith in an all-good and all-powerful God. The Shack, based on the 2007 novel by William P. Young, is a serious attempt towards the same. The movie shows Mack who is in deep shock from the sudden loss of his youngest daughter struggling with the issue of faith and forgiveness. By a turn of events, He meets the Trinity which manifests to him in a homely setting as Mother-Son-Sarayu (a young lady as the Spirit). The Trinity don't look European (white) in this movie. The traditional image of the Father as someone aged (here, first shown as Mother (Papa) and later as Father-figure ) is kept intact. Of course, we may think the Ageless One need not be depicted as an old aged. But, the movie maker tried to not disturb the traditional imagery too much. The movie draws a very homely, friendly, and lively scenery of the conversations between Mack and the Trinity.

There are a number of theological and apologetic reasoning strewn into the conversations, most of which are familiar in Christian responses given to the problem of evil. Themes of freewill, divine sovereignty, moral choice, and the suffering of God feature well in the discussions. However, Mack cannot be helped by any of these until Wisdom shows him his daughter Missy happy in heaven. It is at this moment when hope, faith, and love combine in Mack and he is healed of the sting of suffering. Later on, of course, he also needs to learn to forgive the murderer of his daughter. He needs to forgive and say it out aloud that he has forgiven that man in order to be delivered.

The movie has made a great attempt at trying to make a sense of human suffering in light of the revelation of God in the Bible. In the final state, it is the vision of hope that he can meet his Missy again that has the greatest panacea for Mack's suffering. Then, it is an act of love - to forgive - that finally emancipates him. Of course, it also involves his remorse, repentance, and love to Triune God.

Of course, underlying all is a deep religious experience of personal encounter and a remarkable vision.