The City of Magic - Chapter 2 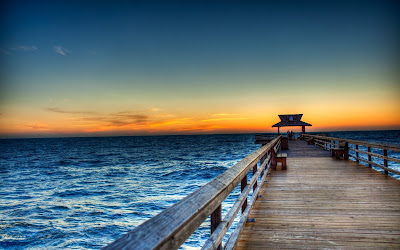 The Bridge of Time

he man was old and had a stern, rigid face. His flowing gray hair and beard were neatly groomed, and his robe was plain and dazzling white. The furrows on his forehead were deeply cut, seemingly produced by intense and constant thinking, and in his right hand he held a stone tablet with something engraved in it.

“Sir, some strange events have happened to me today,” I said, “You seem to me to be a wise man and perhaps you can solve these riddles that I’m entrapped in. I saw a lady dressed in black who called herself Sin [at this moment his eyes became tense, and my voice as well]; and all of a sudden I find myself in this bridge and can’t tell if it is a dream or if it is real. I do not know where to go and what to do!”

“Did you see the face of Sin?” he asked.

“No!” I answered, “She stopped me from turning on the light.”

“That’s right, for light quickens her fatal powers, and only Death can live in the presence of Sin.”

I was puzzled. He continued,

“Either Sin brings you to Death or Death takes you away from Sin; there is no other way around.”

I was perplexed. “Am I dead, then?” I asked. It seemed I had more reasons to think this so; though I was still wondering about the events that had only transpired a few moments ago.

“You are on the Bridge that leads to Life or Death,” he answered.

“Which is the direction to Life?” I quickly asked.

“There are no directions here. It all depends on what you do.”

“Yes, what you do. There are many lamps and sign posts here that people of all kinds, wise in their own eyes, have hung or nailed in behind. These do the simple and unwise keenly peruse, admire, and try to emulate. But, they only tend towards confusion. The wise read my instructions and walk into the domain of Life.”

So saying, he walked to an empty post on the railing and inserted the stone tablet that he held into a casing on it, and suddenly out of the tablet beamed light. A few passersby stopped to look at the light and as soon as they had seen it, I saw a dark cloud envelop them, and in a moment they were gone. My knees trembled in confusion and fright.

The old man stared at me with cold indifference. “You may have wondered what has happened to them,” he said “They have looked at my light and have been claimed by Sin and Death. Everyone who looks at me sees himself as he is; and he who has seen himself is done with the Bridge of Time.”

“You’ve chosen to know me; and when you’ve seen me as I am, then you’ll know yourself and pass over this Bridge without having to decide what to do and where to go.”

“Who am I?” my lips uttered, in doubtful hesitation.

He laughed, and he laughed, and the laughter grew louder and wild till the whole bridge shook and I sat down to prevent losing balance. Then he looked at me with a piercing glance and said,

“You are nothing apart from what I declare of you. And, yet it is not I who make you. Every man is his own craftsman. For, like a potter who guides his hand over the clay to give it its shape, so does every man guide his actions to give his life its shape; and a man’s actions declare his identity. Mortal men choose to hide from my light under lamps they burn instead of me. They call themselves by names and titles that have no significance for eternity. They heap praises and amass praises under a delusive identity. But, every man’s action is brought to light; for no man can from my fiery eyes hide. I rule over brute nature, and the strongest and the fiercest in the distant galaxies submit to me. Yet, my scepter is stayed from the world of humans by their defection to my most hateful enemy, Hamartia, the dark robed lady who is also called Sin. With dark sorcery she blinds the eyes of these mortals so that they lose sight of me, and her dazzling sword spills the life from within their veins; and, yet do both her son and she know that her strength of destruction derives from me; for, it is not until she brings them under my bare light that she can carry them over this Bridge of Time to the Kingdom of Death. In fact, it is through me that even Sin has her identity.”

“What is your name and where do you live?” I asked.

“My name is Law and I am the code of this universe. By me do the heavenly bodies know their respective paths and revolutions, by me does the sun shine and the stars know to twinkle. I live in the velocity of the winds, the charge of the lightning, the sound of the thunder, and the dance of the waves. By me do the fish learn to swim, the deer learn to leap, and the birds learn to fly. By me are the colors of the rainbow, of the lily, and of the butterfly. It is I who determine the age of the moth and the mammoth alike. I am the code of Reason and the code of Nature; I am the code of Justice, of Pain and of Pleasure. I am the blueprint of the universe. By me are the foundations of great civilizations laid; departing from me, they crumble and fall. He who is spotless in me will live forever; but he who falters by a jot is unshielded to Death’s darts. I am blessing to the obedient and curse to the rebels; delight to the angels and distress to the devils. He who has known me has the key to the riddle of the universe. He who has known me has known himself.”

As he spoke those words, his countenance began to grow bright and his garments radiated such light that my eyes had difficulty to behold. Suddenly, his light beamed into the like of a giant luminous mirror and I saw my reflections on it in every contorted semblance. The light of the images pierced my soul with such heavy shafts that I pulled my arm over my eyes and fell to the ground with a loud cry. Then, a dark cloud enveloped me and everything blacked out.
Labels: Book City of Magic Novel