The City of Magic - Chapter 4

A Cop and a Map

felt thoroughly uncomfortable with the rags inside, but tried to appear as comfortable as possible on the outside. Someway, however, it seemed too difficult and I was afraid to be embarrassed. The chain of events was a tangle too hard for me to resolve and I wished to get out of this dream world. But, it didn’t look as much as a dream anymore. I was afraid it was real. I was walking on the footpath thinking of all these things when I spotted a policeman. So, I walked up to him to make few queries.

“Hello, Sir!” I greeted, “Do you know where I can get a map or something that’ll help me know a bit about this city. Also, I would like to find a place to stay for the night.”

I raised my brow in surprise. “Why, night is the hour when the sun is not up and it is dark,” I said.

“And, what is this sun?” he returned.

I was a little puzzled and it first seemed that this might be a joke; but, he looked stern and serious, so I wondered if the people here never saw the sun.

“Is it always dark here?” I asked.

He looked at me angrily and said, “Go away to your home, young man! You seem to be overdrunk.”

“I don’t have any home here, “I replied, “aren’t there any hotels?”

“Hotels?” he retorted with a questioning look on his face, “What gibberish are you talking? Get away from here, or you’ll be put to bond-work for losing your mind!” he shouted.

He looked irritated. “Keep your eyes on your head, young man! There’s a book store there,” he pointed to a shop across the street.

“Thanks!” I replied and left in the direction of the store. I found a little book there with the title “City Guide”. It had maps in it and what appeared to be rules of the city. I bought the book, and sitting down on a little bench on the sidewalk, opened it to peruse. The maps depicted the city as one which was very well-planned. The city appeared to be a regular hexagon with a diagonal measuring 60 miles. It was divided into 7 divisions with what seemed to be the Administrative Block called Superbia in the center. The Market area was a 3 miles thick area that ran around the periphery of the Superbia. From each side of the hexagonal center around the Market began each of the other 6 divisions of the city. Two main roads separated the Market from the divisions and the Administrative Block. Six other main roads branched off from the upper main road to separate each block from the other. 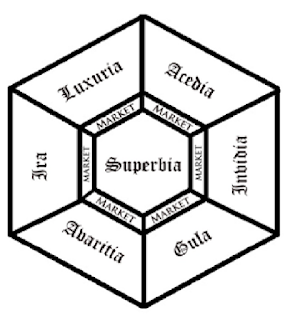 I tried to locate myself on the map and observed that I had walked up to here from somewhere on a street that branched off from the road that ran around Superbia. I was sitting on the street whose direction was straight towards Ira, and I was four streets away (around 5 miles) from the main road that ran through the Market between Ira and Luxuria. I calculated that I might be around 2.5 miles away from Ira and, so turning to the page of its map found that it was interplay of several buildings divided by little streets. There was a page that talked of the administrative structure of the city, and I noticed that each block was governed by an official by whose name that respective block was also called. There was also a square in each block, and a great amphitheater in Superbia. In Superbia, also, was the palace of the King Sarx and his wife, the Queen Hamartia. When I read her name, a hateful feeling ran through my nerves and I shut the book down. I absent-mindedly gazed on to the street for some time; then, suddenly, my mind returned and I noticed that I was gazing at the policeman across the street. I opened the book again, this time to the page where the rules of the city were mentioned and began to read these lines:

Rules for the Citizens of the City of Magic
1.      Each block is governed by a governor who is appointed by Her Excellency, the Queen of Magic. Every citizen is expected to submit to the rule of the governors without any exception of any kind.
2.      No citizen is to engage in any discussion or conversation that repudiates the reality of Kingdom of Magic and/or the authority of the Queen. Any citizen found involved in such treason shall be declared a traitor and his fate resolved in the Court of Ira. May the ire of infernal fires fall on and destroy such an inhuman being! He has confederated with our Archenemy, and may his end become a horripilating warning for others!
3.      No citizen is permitted to be seen outside his home in rags.
4.      All markets, businesses, jobs, and generation of income are under the purview of the King. No citizen will withhold any information regarding his income and possessions nor fail to pay the due taxes to the King’s treasury.
5.      Littering is strictly prohibited. Citizens must cooperate with the government to keep the City clean.
6.      Citizens are prohibited to climb over or attempt to peep over the walls surrounding the City.

I stopped here. “So, this city has walls,” I thought. “There must be a way out!” The rags inside made me feel very uneasy and uncomfortable, and I squirmed. “I must get rid of these, first,” I said to myself and looked here and there not knowing what I was looking for. I turned to the map of the City again and looked at the main road leading to the end and culminating near the wall. I placed my finger there and said to myself “I must get there!” I wondered if anybody else had ever tried an escape; and I also still wondered if it was worth attempting this in case this was just a dream. But, the last rule that I had read drove this curiosity deep.

“You think you have figured it out, don’t you?” I heard a voice ask. I turned aside and saw a man standing above and at my side with a hood pulled over his head almost covering his eyes. I studied his face for a few seconds and thought that I had seen him somewhere. Then, all of a sudden I remembered something and my face grew pale.
Labels: Book City of Magic Novel