The City of Magic - Chapter I

he dim lights flickered on the street as I turned in the key and got inside my house. It was dark. So, I reached my hand to turn on the lights when I heard a strangely sweet but cynical voice, 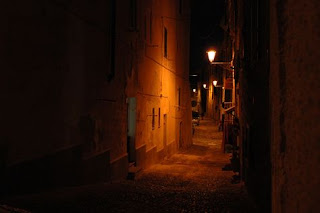 “Would you really do that? For the moment you do that you’ll die!”

My heart stopped for a moment and chilly sweat drops broke onto my forehead. I felt numb and powerless. I shuddered, wanting to open the door and flee but was motionless. Then into the pale moonlight creeping through the window walked the tall silhouette of a woman dressed in a dark robe and a hood pulled over. By her waist hung the appearance of a sheathed sword.

“Sit down!” she ordered. I slumped into the chair.

She walked out of the silhouette and came closer to me. She had the venomous fragrance of a thousand roses from the vale of death.

“Would you really know me? Yet, I am not unknown to any human and my praise echoes in the corridors of the darkest regions. Light and wisdom are dalliances of leisure. I reign in the deepest realities of mortal hearts. And, deep beneath the outward mask of their talks of reason, boils the volcanic furnace of my invincible treason. I am the invincible one, the all sovereign, the orchestrator of all vice, the mother of Death! By me are wars raged, cities ravaged, and histories erased. By me is order and confusion, darkness and light. For me are cities built, economies constructed, markets invented, and commodities made. My voice do all mortals obey; princes and paupers, sinners and saints, preachers and hearers, the wise and the fool: they make no difference to me – all have bled under my blade. My kingdom is the largest and my servants as numerous as the stars of the sky. Would there be anyone who would heap up words and statements to despise my strength, I would meet him in a place that he considers safest and there watch him turn pale, numb, powerless, and fall before my face. I invalidate their reason and falsify their beliefs by turning their bestial passions over them. My name is dreaded in the monasteries and shunned in the universities. Yet, none can escape my power; my venomous arrows lay plunged like barbed hooks in their hearts. They know me by different names in different lands. Some call me good and some call me bad, some call me natural and others call me infernal [she laughed sinisterly here]; a few think I am a kind of disease that must be cured…”
She touched the hilt of her blade, pulled it a little and pushed it back – my heart thumped.

At this moment my mind felt like a black hole; it almost felt that it would explode from the pressure of confusion and tedious emptiness that increased with every word I heard.

She unsheathed her sword and it dazzled in the moonlight. She raised it towards me, I cringed; she said:

“Shouldn’t you see the world of the neither-not,
Where ideas live and where battles are fought?
To a world unseen; to the world of thought;
To the world where now rests your lot
To remain with me and be conveyed across
These fringes of time to Death’s Dark House!”

And, she turned her sword and there seemed to be worms of light rushing over the blade in such velocity that within the twinkling of an eye there were sparks, a blaze, a crackling explosion and I found myself standing on an endless bridge over an endless ocean. There was no sun or moon or star above, but the sky was filled with a pale reddish light resembling a dusky evening all over. The only difference was that this evening seemed to be endless. There were people of all sorts walking over the broad bridge, and there were dim lamp posts, sign posts, every here and there. Many people were reading the posts as they walked; some looked confident, but most appeared confused. For a moment, I was caught away in watching the people and the things around, but then my eyes fell on two young men fighting with each other with switchblades in hand and I remembered the lady and the vision, but couldn’t understand what was happening. I thought to myself, “This must be a dream” and so pinched myself to wake me up, but I was still there on that endless bridge, seemingly all lost.

The two young men had now reached at a handbreadth of me as they yelled and struck at each other. One of them was about to tip over me, but I held out my hands to hold him and cried, “Stop! Stop! Stop it! Why do you fight?”

He pushed me away and I staggered to fall, but then I felt that some hands had come behind me and restored my balance. I turned around and saw a heavy-built man who appeared to be a police officer. He didn’t look at me but rushed towards the young men, who on seeing him began to run away. He chased them for a few yards and then stopped and returned. I said, “You should have caught them; for, they’ll get away and find another place to fight and kill each other!”

“But shouldn’t you stop them from such evil, seeing that they are bent on killing themselves?”

“What difference is it to you and me, if they are up for a duel and have agreed to kill each other? They are a law unto themselves,” he replied.

“But, then if you allow this, then by the same token you ought also to allow it if everyone decided to kill each other; then, wouldn’t that be the greatest self-destruction of people, society, and humanity?”

He stared at me with a vexed glance and then said, “I think, stranger, that you’re wasting both your time and mine. You seem to have come here to tour this country and so seem to be having plenty of time; but I have none. Sorry, I have to go.” And so saying, he proceeded to go away in the direction from which he had come, opposite to that in which the two young men had gone; but then turning around while walking backwards away, he quipped, “If everyone in the world decided to kill each other, no law or law enforcement would be able to prevent them from doing so.” So he said and then turned around and walked away into the twilight.

I watched him disappear and was very much perplexed by what he had said. I didn’t feel it right that the two young men were left to the fate that their passions had triggered in their souls. Yet, I also knew that every man couldn’t have a policeman after him to stop him from an evil that he felt he had reasons to do, or at least, couldn’t avoid doing. “Don’t such ‘reasons’ solidify into rules and, when accepted on a major scale, become laws of society; so that what was once considered noble is today considered to be oppression?” I began to walk in the direction in which the two boys had fled, not knowing where to go. There were a greater number of people walking in that direction and it seemed safer to me to be with the crowd. I walked for a little while in this manner, but the more I walked, the longer the bridge seemed to grow, and I began to feel anxious and tired. I thought to stop and rest for a moment, and so went to the rail of the bridge and leaned on it with my arms, looking out at the vast expanse of the ocean.

“Are you lost?” a voice asked, and I turned around.
Labels: Book City of Magic Novel