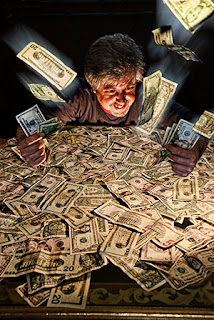 There is nothing filthier than the pride of being filthy rich. These surround themselves with illusions of material privileges while, in reality, spiritually clad with filthy rags.

There is nothing more disgusting than the sight of one who pretends to be a servant of God, but whose life only betrays of his being a slave of mammon. Such a personality is filled with talks of luxury, riches, special privileges, power, prosperity, superior than others mentality, and an agonizing desire to be regarded with special consideration for the sake of his wealthier position. The love of honor for any reason whatsoever is despicable in God's sight. The Bible stipulates that a man of God must be free of any love of filthy lucre (1Tim.3:3,8; Tit.1:7; 1Pet.5:2 KJV). How unhappy is the sight of a servant of God who uses phrases such as "filthy rich" without considering the element of menace that is associated with the term "filthy lucre"!

But, how much more vile is the tapping of such greed to convert it into an incentive for ministry! One offers another the incentive of greater pays in return for ministry--how impossible! Can one show mammon to attract a servant of God? Equally vile is the use of Scripture or prophecy to lure in donation for a return of a hundredfold blessing of God, isn't it?

Certainly, the Bible doesn't praise poverty that results from laziness. "He who has a slack hand becomes poor, but the hand of the diligent makes rich." (Pro 10:4). However, the Bible openly condemns the love, craving for, pursuit, and pride of wealth. It condemns all feelings of superiority, pride, and privilege that comes from the covetousness of wealth. It condemns seeking to retain all returns for selfish use, hoarding of wealth for personal enjoyment alone, and disregarding of the fact that riches on earth cannot assure a place in heaven; neither can a man give anything in return for his soul. And, what does it matter if a man has gained the whole world but lost his own soul? Jesus taught through the Parable of the Rich Fool that a man who hoards wealth for himself alone without considering the true purpose of life briefly allotted to man, is a fool. "But God said to him,`Fool! This night your soul will be required of you; then whose will those things be which you have provided?' So is he who lays up treasure for himself, and is not rich toward God." (Luk 12:20-21). Jesus told those who sought Him, "Do not labor for the food which perishes, but for the food which endures to everlasting life, which the Son of Man will give you, because God the Father has set His seal on Him." (Joh 6:27). He said, "Do not lay up for yourselves treasures on earth, where moth and rust destroy and where thieves break in and steal; but lay up for yourselves treasures in heaven, where neither moth nor rust destroys and where thieves do not break in and steal. For where your treasure is, there your heart will be also. (Mat 6:19-21)

There are some who claim that Jesus was a rich man, a rich carpenter in fact. Some try to prove that the gold, myrrh, and frankincense Jesus' family received from the Magi might have made them wealthy. Usually, such arguments are used by rich men or by those who wish to become rich and richer and richest.

There is one reason why Jesus didn't say, "Ye cannot serve God and Satan;" He said, "Ye cannot serve God and mammon." (Mat 6:24). The Bible tells us that the Lord of Universe, rich, became poor for us, so that through His poverty we might be rich" (2Cor.8:9). This doesn't talk of material affluence. Jesus did not come to the earth so that we may become rich barons. He came to give us life and life more abundantly. He came so that we might become rich in good works and rich in faith.

Command those who are rich in this present age not to be haughty, nor to trust in uncertain riches but in the living God, who gives us richly all things to enjoy. Let them do good, that they be rich in good works, ready to give, willing to share, storing up for themselves a good foundation for the time to come, that they may lay hold on eternal life. (1Ti 6:17-19)

Listen, my beloved brethren: Has God not chosen the poor of this world to be rich in faith and heirs of the kingdom which He promised to those who love Him? (Jam 2:5)

Certainly, God blesses the work of the laborer. But, He praises the widow who puts her two mites more than those who flaunt their riches, even at church. He looks not at how much one has, but at how much one loves. Contrast this to those who send gold certificates to the ones who give them more offering or donations, and privilege those who have paid above 100,000 or whatever by etching their names on stone slabs.

The man of God was wise to pray: "Remove far from me vanity and lies: give me neither poverty nor riches; feed me with food convenient for me: lest I be full, and deny thee, and say, Who is the LORD? or lest I be poor, and steal, and take the name of my God in vain." (Pro 30:8-9)

The Bible exhorts us:

Now godliness with contentment is great gain. For we brought nothing into this world, and it is certain we can carry nothing out. And having food and clothing, with these we shall be content. But those who desire to be rich fall into temptation and a snare, and into many foolish and harmful lusts which drown men in destruction and perdition. For the love of money is a root of all kinds of evil, for which some have strayed from the faith in their greediness, and pierced themselves through with many sorrows. But you, O man of God, flee these things and pursue righteousness, godliness, faith, love, patience, gentleness. (1Ti 6:6-11)

There are some who think that the only best way to influence a culture is by ascending to a seat of great wealth and great political authority. They do not answer why Jesus did not choose to be born in a palace, rather chose to be born in a manger. Albert Einstein, though not a theologian or missiologist, was wiser in this regard when he said:

I am absolutely convinced that no wealth in the world can help humanity forward, even in the hands of the most devoted worker in this cause. The example of great and pure individuals is the only thing that can lead us to noble thoughts and deeds. Money only appeals to selfishness and irresistibly invites abuse.

James was vociferous to denounce the wealth-seekers:

Come now, you rich, weep and howl for your miseries that are coming upon you!
Your riches are corrupted, and your garments are moth-eaten. Your gold and silver are corroded, and their corrosion will be a witness against you and will eat your flesh like fire. You have heaped up treasure in the last days. Indeed the wages of the laborers who mowed your fields, which you kept back by fraud, cry out; and the cries of the reapers have reached the ears of the Lord of Sabaoth. You have lived on the earth in pleasure and luxury; you have fattened your hearts as in a day of slaughter. You have condemned, you have murdered the just; he does not resist you. (Jam 5:1-6)

To fellow-Christians, he wrote:

My brethren, do not hold the faith of our Lord Jesus Christ, the Lord of glory, with partiality. For if there should come into your assembly a man with gold rings, in fine apparel, and there should also come in a poor man in filthy clothes, and you pay attention to the one wearing the fine clothes and say to him, "You sit here in a good place," and say to the poor man, "You stand there," or, "Sit here at my footstool," have you not shown partiality among yourselves, and become judges with evil thoughts? Listen, my beloved brethren: Has God not chosen the poor of this world to be rich in faith and heirs of the kingdom which He promised to those who love Him? But you have dishonored the poor man. Do not the rich oppress you and drag you into the courts? Do they not blaspheme that noble name by which you are called? If you really fulfill the royal law according to the Scripture, "You shall love your neighbor as yourself," you do well; but if you show partiality, you commit sin, and are convicted by the law as transgressors. (Jam 2:1-9)

Here, James says that those who claim to have faith and show partiality at the same time have their faith nullified by their transgression of the commandment of love. Such faith is dead.

I am glad Peter was not CEO of some NGO whose main job was to raise funds for cripples. If he were so, he could never have said to the lame man: "Silver and gold I do not have, but what I do have I give you: In the name of Jesus Christ of Nazareth, rise up and walk." (Act 3:6)

When the disciples brought the problem of money before Jesus, that 200 denarii worth of bread was not sufficient to feed the multitude, He did not call for a committee meeting to consider the problem. The Bible says "He Himself knew what He would do." (Joh 6:6) And, He did.

When money becomes the chief concern of a servant of God, then he has joined the ranks of the filthy. Better is a man who can say with Paul, "I have coveted no one's silver or gold or apparel. Yes, you yourselves know that these hands have provided for my necessities, and for those who were with me." (Act 20:33-34).

Wasn't Paul the one who considered everything of the world (this included riches as well) as dung that he may gain Christ? (Phil.3:8). How come then we have people who claim to love Christ and at the same time are thrilled by the love for big cars, big houses, big shots (being friends with such), and big money -- in a word, filth?

But, here is the comfort:

Then Peter began to say to Him, "See, we have left all and followed You." So Jesus answered and said, "Assuredly, I say to you, there is no one who has left house or brothers or sisters or father or mother or wife or children or lands, for My sake and the gospel's, who shall not receive a hundredfold now in this time-- houses and brothers and sisters and mothers and children and lands, with persecutions-- and in the age to come, eternal life. (Mar 10:28-30)