God in Graphology: Considerations in Gematria, Theology of the Alphabet (Hebrew, Chinese), and Philosophy of the Word

Let us call the method of trying to decode the writing system in order to seek proofs for faith as "Graphological Theology".

The works of Ivan Panin that discover numeric patterns in the Bible are examples of Textual Gematria. Check the following excerpt from his letter to the New York Sun:

There has certainly been criticism that Panin was creating the patterns arbitrarily and, if we look for, we can find numerical patterns anywhere (See Ivan Panin and the Gospel of Mark). However, this doesn't diminish the fact that Gematria has been used as an apologetical tool in graphological theology.

Theology of the Alphabet

Jewish mystics have maintained that God created the universe from the 22 consonants of the Hebrew Aleph-Bet, called the otiyod yesod, the foundational letters [Hebrew4Christians]. A theology of the alphabet would contend for the sacredness of the alphabet's origin in God. An even more intense form of this would lead to the mysticism of the alphabet. Check the following comment on Genesis 1:

After Bere’shiyt bara ’Elohiym there is a fourth untranslatable word. That fourth word is actually two Hebrew letters: the Aleph and the Tav. The aleph-tav (את) does serve a grammatical purpose in that it points to the direct object of the sentence. These two letters do not actually form a word, but rather they express an understanding. The aleph (א) is the first letter of the Hebrew alphabet, and the tav (ת) is the last letter of the alphabet. The placement of these two very significant letters at strategic locations within many sentences of the Hebrew Scriptures express a total completeness. It is equivalent to saying "from alpha to omega, from a to z, from first to last, from beginning to end." So, from the Hebraic point of view, they see that "In the beginning ’Elohiym created the aleph-tav. In other words, they believe that the very first thing ’Elohiym created was the Hebrew alphabet, which is known through ancient writings also as the aleph-tav. They recognize that He created the letters by which all life and all physical things spring forth from. They are divinely ordained building blocks of life. [Brad Scott, "Mysteries and Truths Hidden Within the AlephBeth"]

However, the Bible doesn't seem to support the prioritizing of any one particular language as such. The Bible was also written in Aramaic and Greek; and Jesus, in the New Testament, actually declares Himself to be the Αlpha (A) and the Omega (Ω), the beginning and the end (Rev.1:8,11; 21:6; 22:13). Alpha is the first and Omega the last letter of the Greek Alphabet.

Genesis in the Chinese Characters

But, this may not be limited to just Hebrew or Arabic. Studies in the Chinese characters have been used as proofs for the reliability of the Bible by Chinese scholars. Check the following two excerpts from C.H. Kang's The Discovery of Genesis (1979): 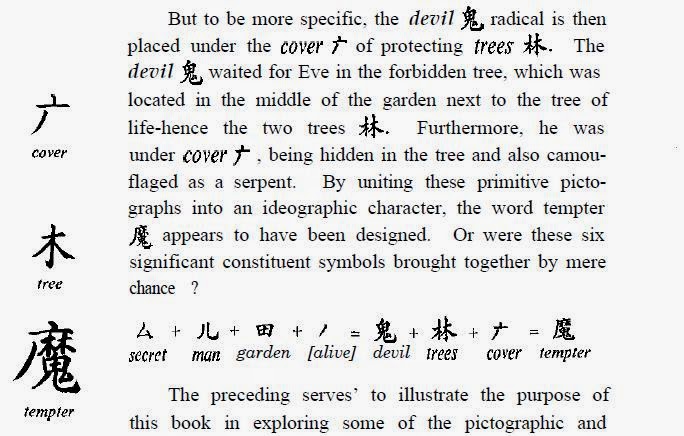 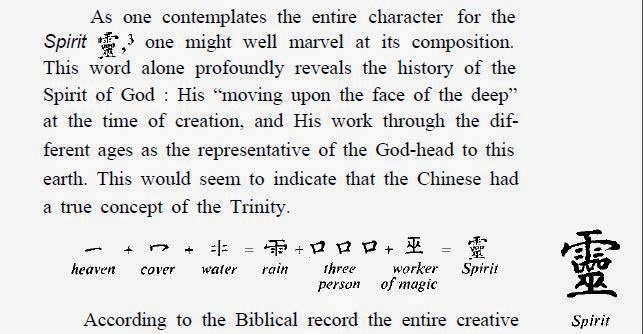 Again, the validity of such interpretations has been debated. One counter-argument has been that such interpretations are very literalist and do not do justice to the intent of the character composition. It has been argued that though the characters were ultimately derived from pictograms, when they became used for writing, they ceased to be pictographic, and that most of the Chinese characters have both phonetic (establishing sound) and signific (hinting at a semantic category). For instance, "the character 媽, used to mean 'mother', is composed of the elements 女 'woman' and 馬 'horse'. While the component meaning 'woman' hints that the character has something to do with women, the component meaning 'horse' in fact establishes pronunciation - both the 'mother' and 'horse' morphemes are pronounced /ma/, albeit with different tones." [Wiki: Chinese Characters and the Bible]. But, the fact that the contextual apologists were looking at the ultimate derivative beyond the surface usage, is certainly not discounted.

Philosophy of the Word

Verse 1-2 of the Taittiriya Upanisad's fourth chapter describes the Sacred Syllable Om as "preeminent in the Vedas, that pervades all words, and that emerged from the immortal Vedas as their quintessence..." [Trans. Swami Gambhirananda, Advaita Ashrama]. The Mandukya Upanisad exposes Om as the the Beginning, Middle, and End of all sound; it encompasses all the sounds beginning with the opening of the mouth with the sound (Aa), then closing to middle with U, and closing down with Ma. OM=Aa+U+Ma. The Upanisads encourage the recital of Om before every incantation of prayer (Taittiriya 1.8.1). Check the poetic motif of Om in this beautiful prayer of the Brhadaranyaka Upanisad 1.3.28:

The Hindus have long looked at Om as the Beginning and the End of all reality. It has become the religious symbol of Hinduism. Practical Hindu mysticism values incantation and utterance of Om as encompassing all things including all quarters of space and time.

Interestingly, the Indian concept of Om seems to be a bit parallel to that of the Greek AΩ (See above). However, the philosophical frameworks of meaning in which the terms are used compel difference. Still, the concept of Beginning-Middle-End looks inviting to compare it with the phrase, "who is and who was and who is to come". Also, the idea of the All-Encompassing cannot ignore the Person in whom all things, both in heaven and on earth, will be gathered together (Eph.1:10). Yet, again the Biblical view is Trinitarian and non-pantheistic, and the human soul is a creature of God.

Heraclitus taught that the universe was governed by the Logos, which means "word" but may also be interpreted as "law" or "reason". According to Heraclitus,
Church Father Justin Martyr (c.100-c.165), elaborately made use of the Logos theology as an apologetic approach to Greek philosophy and religion. In Christian Theology, Logos is the Person of Christ. This helped Justin to accept philosophers such as Plato as speaking according according to the Word. According to Justin,

Even before the coming of Christ, the logos was manifested partially in such Greek philosophers as Socrates and Heraclitus, and in such Hebrews as Abraham, Ananias, Azarias, Misael, and Elijah (1st Apology). Plato’s truth was dependent on Moses (chs.59-60).
o The seed of God’s logos (logos spermatikos) was disseminated to all men in their God-given capacity to respond to truth. “Whatever things were rightly said among all men are the property of us Christians” (2Apol. 13:4)
o There were Christians before Christ, such as Socrates and Heraclitus (1Apol. 46:3)
o All Theophanies in OT were Christophanies “For the ineffable Father and Lord of all neither comes to any place… but remains in His own place…” [Dial.127:2, See Justin Martyr]

Similar line of thinking exists in Sikh theology, in which the Sabad, i.e. the Word, is considered to be the Guru (i.e. the Teacher).

Is Graphological Theology biblically justifiable? With regard to Theology of the Text, the Bible does speak about every scripture being inspired and that every jot and tittle having significance in the Bible (2Tim.3:15; Matt.5:18). However, there are dangers in over emphasizing gematriac patterns and disregarding the messsage of the Spirit for the composition of the word. God gives us the tree in order to eat of its fruit; not to count its leaves and spend time analysing its patterns. However, this doesn't mean that the patterns do not exist; for everything that is God-created is God-sealed.

The same also holds for studies in Chinese characters. It is certainly not very surprising to find bridges and connections to the Bible in local folk stories, rituals, and even graphology. Don Richardson has recorded amazing missionary findings in various cultures all over the world in his very important book Eternity in their Hearts. However, one must be careful to not assume a bridge where a bridge doesn't exist, or else he may have to walk over thin air. The Chinese findings cannot be discounted as accidental; nor does an argument of phonetics rule away the question of finding the sources of the original characters. God is not just the God of the Hebrews or of the Mayans; He has been historically present among us all from the beginning. And, His trails are visible among us. We only need to find them.

But, what about the inclusion of the extra-biblical themes in the study of Scriptures. Again, one must be careful not to misapply anything to where it doesn't belong. We must remember that the Bible only tells us this about the Scriptures:

All Scripture is given by inspiration of God, and is profitable for doctrine, for reproof, for correction, for instruction in righteousness, that the man of God may be complete, thoroughly equipped for every good work. (2Ti 3:16-17 NKJ)