He Stills the Storm to A Whisper: An Unforgettable Boat Ride (Story with A Lesson)

One day, the Bible tells us in Luke 8:22, Jesus got into a boat with His disciples. There were many times that Jesus chose to have a boat ride along with His disciples. If you have been on a boat sometime, you may remember it as a very pleasurable experience. But, for those who have travelled in a boat many times, almost everyday, the ride is as common as going to school in a school van, car, or an autorickshaw. 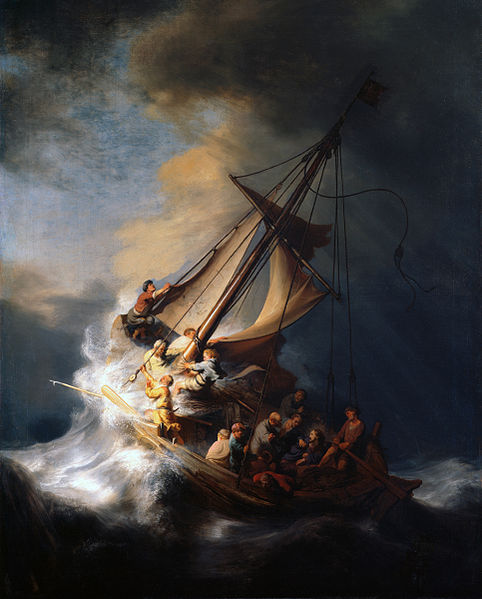 But, this was a ride that the disciples could never forget. How do we know that? Because they spoke about it again and again, and we read about what they spoke in the Bible. You never speak about your everyday walk or ride to school in general. But, if you had some unusual or very different experience, you would surely tell. And, in case you had an unforgettable experience, you might even want to write about it. So, what was this experience that the disciples of Jesus had?

It was the experience of a windstorm. You might have heard of storms, but there are different kinds of storms, like the hailstorm, the rainstorm, the snowstorm, the ice storm, the sand storm, the dust storm, the fire storm, the thunderstorm, and the electrical storm. If someone was driving a car and suddenly there was a hailstorm, it could make them terribly afraid. The hailstones would start pattering hard on the car roof, the big icy stones could even crack the window and front glasses and cause great damage. Sometimes rain comes like a storm; then, we call it a rainstorm. In some places, during a rainstorm, houses collapse and trees fall. Also, the roads and streets become filled with so much water that people have to use boats to move around the town. That may seem very exciting, to go about in boats, but it is not really exciting after all because the water is stinky and very dirty, and one cannot even live in one’s house anymore, even at night!

Storms of all kind are very destructive. But, to people in a small boat caught right in the middle of a huge lake, a windstorm means death—it is very scary, really. So, the disciples were scared. They began rowing the boat as fast as they could, but it was not possible to fight against the winds. The winds were stirring the waters of the lake like one stirs sugar with a spoon in a glass of water. Just imagine a tiny little boat with people in it in such a glass of water. Can they fight against the spoon? A windstorm is like that spoon stirring the water. And, the disciples were really terrified. But, do you know what Jesus was doing in the midst of such danger? Perhaps, you can imagine what any person would do. Well, but Jesus was just different than all the others. He was fast asleep in the boat. That is amazing, isn’t it? Actually, it shocked the disciples.

So, the disciples began to wake Him up saying, “Master, Master, we are perishing!”

Now, what happened next is the really interesting thing. It was the thing that the disciples never expected, because they never ever had thought that something like that could happen. You know what, Jesus simply arose and scolded the wind and the raging of the water, and they stopped, and there was a great calm. To you this may look very normal, because you expect Jesus to do just these kinds of things; that’s why He is Jesus right? That’s what makes Him different from the disciples. But, to the disciples it was too amazing. They had never seen something like this in their life, and never thought that something like this could ever happen.

But, Jesus was not happy with the disciples. He turned to them and scolded them asking, “Where is your faith?” Actually, Jesus wanted His disciples to understand that for children of God, it is not normal to panic in the sight of danger. God doesn’t expect that of them. If they were the disciples of Jesus, they should never be afraid of storms; whether it is a rainstorm, a hailstorm, or a trouble storm.

Now, people usually wrongly associate one thing with the other. They say that every cause has an effect, which is true in many ways; but it is not always true in the way people think. For instance, there are people who think that we should not move ahead on the road after a black cat has crossed it. They say that if we do that, there will be an accident. They even tell stories of people who went ahead after a black cat crossed the road and had an accident. But, this is false. The black cat crossing the road doesn’t cause accident. But, for some people this idea has become so permanent and unchangeable that even if they may say in their head that a black cat cannot cause accident, they would still be afraid to move ahead on the road, because they would think, “Suppose, the black cat did cause the accident, then?” That is what we call little faith.

The disciples also suffered from it. For them, it was a like a scientific law to believe that a storm meant certain destruction. Some of them were expert fishermen and they might have many times heard the stories of people who got caught in a storm and lost their lives. Now, when they were in that same situation, the only thing they could think about was death; they couldn’t think of anything else. Of course, they knew the power of Jesus, of how he could feed 5000 men (besides women and children) with only 5 loaves and 2 fish. But, when it came to boat riding, their previous experience took over and they became very frightened. Now, there was nothing but death that they could think about. So, they began crying, “Master, Master, we are perishing!”

It happens with elders too many times, especially when they have experienced a particular sequence of events multiple times. For instance, they see people who get cancer that they die, and also hear stories of people who die of cancer. So, they form a pattern of thinking in their mind and permanently associate cancer with death. They can think of nothing else. But, that doesn’t need to be so. There are people with cancer who got healed and cured. One doesn’t need to be frightened by it. Similarly, there are different cause-effect patterns or relationships that people form in their minds; patterns that are not necessarily true. But, the saddest part of it is that these thinking patterns prevent them from trusting in God who can calm any storm, even if it were a cancer storm or TB storm or poverty storm or misunderstanding storm. But, the children of God must learn to trust in the presence and power of God. Because Jesus is with us, we have every reason to believe that these storms cannot destroy us.

Now, sometimes it also seems that we are perishing and Jesus is just asleep in the boat, doing nothing. It seems that He doesn’t care. For the disciples, at least Jesus was bodily present with them in the boat; but, what about us? How hard it may sometimes be when we are only praying and it seems Jesus is nowhere around. It seems that He is not only invisible, but He is also sound asleep. But, Jesus wants us to trust in Him even in such situations. Jesus knew that the storm could not kill Him; the storm could not also kill the disciples, because Jesus had a work to finish first and He also had a plan for His disciples that no storm or wind could destroy.

God also has a special plan for you. He doesn’t just have a plan for you but is in the boat, the car, the bus, the room with you. Of course, when a storm comes, you must do what you can, but, you should never forget that God has a purpose for your life. Whatever storm it may be, it could even be the storm of examination fear, of not doing well in the exam; don’t panic, study well and trust in Jesus. I know of a young boy whose very good friend died in an accident, it was a very big storm of sorrow in his life. But, his parents comforted him and soon he understood that such storms are not forever. God is in control of all things. There was another boy who was really very good and loved Jesus very much, but some people started to speak very bad about him and began accusing him of all kinds of wrong things that he knew nothing about. It was a storm of accusations in his life. It was almost impossible for him to fight against all those accusations; he learnt that it is better not to try to prove himself in the midst of such storms but to have faith in Jesus who was with him in the boat in all this. Soon, all those who spoke against him were ashamed and God gave this boy great honor and respect in the eyes of the people who despised him. We must learn to trust in our Lord. He is the one who stills the storms to a whisper and hushes the waves of the sea.
Labels: Children Faith Stories