There are four men (A-B-C-D) standing on each step of a stairs. There is a wall between C and D so that none can see D. Each is wearing either a black or white hat. Two of them wear black hats and two of them wear white hats. Actually, A is wearing white; B, black; C, white; and D, black. 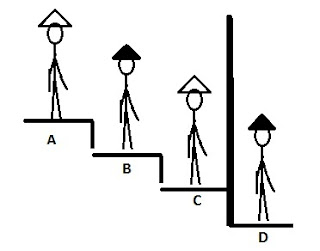 Who will be the first one to tell the color of his hat?

If you have tried very hard and are still curious to find out, scroll down.....

Answer:
B will answer. Let's check his reasoning.
1. If I was "C" I cannot know the color of my hat because I can neither see D nor can I look behind.
2. If I was "A" I could answer if I saw two black hats before me, I would know that I had white on; similarly, if I saw two white hats before me, then I would know that I had a black hat on. However, if I saw a black and a white hat, then I wouldn't be able to know what color hat I wore because I couldn't see D.
3. A is still silent, which means he sees a white and black hat.
4. I see a white hat before me on C.
5. Therefore, I am wearing a black hat.
Labels: Puzzles