Puzzle: The Two Doors and the Two Doorkeepers: How to Get to Heaven?

A man who was was good to his neighbors but wasn't a believer in God died and was standing before the Pearl Gate. Peter, who had the keys, according to this story, said to him: "Son, you have been good to your neighbors and so you are given an opportunity to find out your way into heaven. Remember you have only one chance. 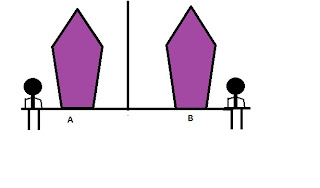