Should Christians Celebrate Christmas on December 25? 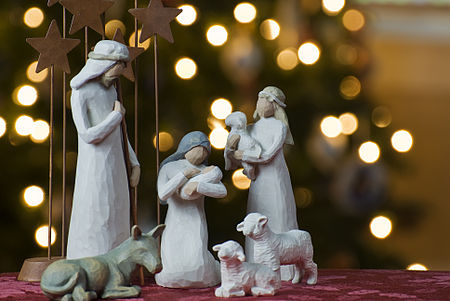 There is a popular view in circulation that Christmas must not be celebrated on December 25 because it has some (disputedly) pagan origins; in fact, the very term “Christmas” is under attack. I think the dispute is akin to stipulating that one shouldn’t use the word “nice” because it is derived from the Latin nescius which originally meant “ignorant” or “stupid”. However, that doesn’t excuse us from trying to dig into the history of Christmas. Of course, we also don’t disregard the fact that December 25 is not a universal date for all Christians. We are well aware that Christians in the Russian Orthodox Churches celebrate the Birth of Christ on January 7. In this article we will try to briefly consider the historical story of the date of Christmas and also look at some keys to a proper celebration of Christmas.

The Date of Christ’s Birth
A swift glance at history will tell us that the origins of the Festival go earlier to the time of Emperor Constantine in the 3rd century. Of course, there is that popular notion that Christmas was a political trick introduced during Constantine’s time to dupe people into confusing the Sun Festival (Saturnalia) with the Birth of Jesus and thus paganize Christianity in order to get a bigger following. We know that before Constantine’s conquest of Rome in 312 AD, Christianity was outlawed in the Empire and Christians were persecuted. However, as the historians Eusebius and Lactantius inform us, Constantine was miraculously touched by a vision of Jesus that told him to conquer Rome by the sign of the Cross. Constantine immediately used the sign on his banners and shields and conquered Rome. On becoming the emperor, he declared Christianity as the state religion. It is believed that in this popularity period of Christianity, pagan rites, customs, and festivals crept into the Church, and one of them was the Birthday of the Unconquered Sun on December 25 transformed into the Birthday of the Sun of Righteousness (i.e. Jesus Christ). However, historians tell us that this belief has less historical support; there is no early historical evidence to prove that the Sun Festival was replaced with Christmas. In fact, historical facts tell us something else.

The facts are clear that the Church Fathers, long before Constantine, associated the birth of Christ with the winter solstice (which marks the shortest day and the longest night of the year, inaugurating the spring, usually at the end of December). The winter solstice was chosen to correspond with the spring equinox in March, when it was believed that during the Feast of Passover, the angel Gabriel was sent to Mary to announce to her the birth of Christ.

In his doctoral dissertation submitted to the University of Chicago in 2008, Michael Alan Anderson notes:

Scholarship has established that the Preparation of the Passover (14 Nisan) fell on March 25 in the Julian calendar and was equated with the Passion of Christ. That date coincided with the date assigned to the spring equinox in the Roman calendrical system. As the time of Easter became a variable date in the Christian liturgical year, the date of March 25 was maintained as the date of the Annunciation of the angel Gabriel to the Virgin Mary about the birth of Jesus.

The unusual concurrence in the early liturgical calendars of the Annunciation with the historical date of the Passion on March 25 was not an accident. For the first Christians, the expectation of Christ (parousia) at the time of Pascha was understood as his arrival both at the incarnation and at his second coming. For instance, the second-century Christian apologist, Bishop Irenaeus of Lyon referred to the 'coming' of Christ specifically at the day of his conception. Christ's nativity on December 25 therefore fell nine months after the day of his conception on March 25, a day associated specifically with the Passion in early Christianity.....

With the coincidence of the conception of Christ on March 25 with the spring equinox in the Roman calendar (VIII Kalends Aprilis), Christmas (December 25, or VIII Kalends Ianuaris) was thereby thought to occur at the winter solstice.... (Symbols of the Saints, 2008; pp.42-43)

Andrew McGowan, Former President of Trinity College at the University of Melbourne, and now President of the Berkeley Divinity School, tells us that around 200 AD “Tertullian of Carthage reported the calculation that the 14th of Nisan (the day of the crucifixion according to the Gospel of John) in the year Jesus died was equivalent to March 25 in the Roman (solar) calendar.” He continues to note that “March 25 is, of course, nine months before December 25”, and came to be considered as the time of the Annunciation and the conception of Jesus in the womb of Mary, since it was believed that the day Jesus was conceived in (i.e. Nisan 14) was when He was also crucified on later. Andrew quotes a fourth century treatise titled On Solstices and Equinoxes which states: “Therefore our Lord was conceived on the eighth of the calends of April in the month of March [March 25], which is the day of the passion of the Lord and of his conception. For on that day he was conceived on the same he suffered.” He also quotes Augustine’s On the Trinity (c.399-419): “For he [Jesus] is believed to have been conceived on the 25th of March, upon which day also he suffered; so the womb of the Virgin, in which he was conceived, where no one of mortals was begotten, corresponds to the new grave in which he was buried, wherein was never man laid, neither before him nor since. But he was born, according to tradition, upon December the 25th.” Evidently, by the time of Augustine, December 25 had become traditionally established as the birth date of Jesus.

The Russian Orthodox Church still follows the old Julian calendar, which is currently 13 days behind the Gregorian calendar, and so they celebrate Christmas 13 days later, i.e. on January 7.

But, do we have a biblical warrant for pinning on December 25? Of course, we don’t. As we have already pointed out, there are calendar issues even between the Russian Orthodox Church and the others. In fact, there is no single uniform calendar date with this regard; if one fixes a date, say according to the Julian Calendar, the date is bound to contradict the date of the Gregorian Calendar, and either would need to submit to one of them about a fixed date. Further, the fixation of dates is arbitrary, especially with regard to commemoration. For instance, in 325 AD, the Council of Nicaea fixed Easter (another disputed term) to be held on the first Sunday after the first full moon occurring on or after the vernal equinox. And so, if the full moon falls on Sunday, Easter is delayed by one week. The focus is more on fixing a day of commemoration rather than on making a doctrinal declaration. Thus, one doesn’t have a fixed date of Easter every year. What matters is the day (i.e. Sunday), not the date. However, the same is not observed with regard to Christmas. December 25 is traditionally fixed. Again, it is not a biblical appointment of a feast (as with the Passover and the Feast of the Unleavened Bread for the Jews); it is, as Augustine notes, something developed in tradition. Yet, for certain, there is no historical warrant for claiming that the date is in any case the result of paganizing Christianity.

Some have also referred to shepherds watching over their flocks at night as a case against the wintery birth of the Lord. Of course, anyone familiar with the Mediterranean climate would know that the sight of shepherds being out at night was not uncommon in Palestine.

But Should Christians Celebrate Christmas?
A number of attempts have been made to prove that the symbols of Christmas, like the Christmas tree, the star, and the bells are very pagan. Of course, what people understand by these symbols today is not usually what people claim they originally meant; so, practically trying to forbid the use of these elements through some etymological reminder system is akin to prohibiting the use of “nice” because of its negative etymology, as we noted earlier. Meaning is not strictly etymology, but usage. The meaning of a word or symbol is based on its usage, not on its root origin. However, that is not an excuse for forgetting the real significance of Christmas. A Christian leader once told us that his son had asked him on Christmas, “Dad, is it the birthday of Jesus or the birthday of Santa Claus?” Sadly, Christmas has come to mean different things for different people, and some meanings could be very worldly and unbiblical. Some have chosen not to celebrate the date; for them, the birth of Jesus is a joy to celebrate every day of their life. No attitude would be better than that. I believe we can sing songs about the birth of Jesus throughout the year. It would be very narrow-minded to think that we should sing songs related to the birth of Jesus only around December 25. But, again, to treat refraining from Christmas as a doctrine is again to resort to something that the Bible hasn’t forbidden us – it becomes another tradition or anti-tradition of man. Many Christians don’t look at Christmas as the real birthday of Jesus, but only as a day on which most Christians, and the world, everywhere, celebrates the coming of the Savior into the world. He might have come on some other date (and calendars may differ); however, Christmas becomes an occasion for universal affirmation and commemoration of the fact that “Unto us a Child is born, a Son is given”.

Some Keys to Right Celebration

Dec 25, 2014
The term "Christmas" is a compound of two words "Christ" and "Mass" (the celebration of Eucharist by the Catholic Church). Etymologically, the term refers to the celebration of mass on the anniversary of Christ's birth. Protestants usually refrain from looking at the Eucharist as another sacrifice and at the Bread and Wine as literally turning into Christ's body and blood. Therefore, they never use the word "mass" to refer to the Lord's Supper in their services. However, when they use the term "Christmas", this etymological meaning is not considered (usually unknown). But, the etymological connection of the Eucharist (which literally means "Thanksgiving", from the act of Christ giving thanks for the Bread and Wine) with the Birth of Christ can have a deeper significance--that His birth cannot be seen apart from His death, that He was born the first time in order to die as our Sacrifice. In fact, He couldn't have become our Sacrifice unless He had been made flesh in His body of sacrifice.

Therefore, when He came into the world, He said: "Sacrifice and offering You did not desire, But a body You have prepared for Me. (Heb 10:5 NKJ)
- He came as God's Sacrifice for our Sins (Heb. 10:5-6)
- His First Coming Establishes His Second Coming (In the OT Prophecy, Christ's coming was seen as a single event since they didn't see the Age of Grace in between the two peaks of His First and Second Coming. His First Coming tells us to look forward to His Second Coming). (Isa.61:1-4)
- He came to take away the Old in order to bring in the New. He makes all things new. (Heb.10:9)
- His First Coming as the Lamb of Sacrifice purges and sanctifies forever those who trust in Him. (Heb.10:10)
Labels: Articles Christmas