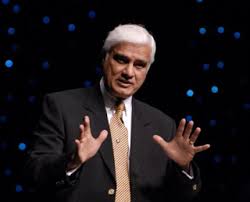 As one of the foremost Christian apologists of this century, Ravi Zacharias’ specialization in Western, Eastern, and Middle-Eastern philosophy takes him to numerous academic circles all over the world. Through his rich literature, broadcast, and record ministry, he has addressed millions of people all over the world. Most of his books and lectures address the present condition of the Western man which he diagnoses as caused by the invasion of rationalistic atheism and secularism in the once Christian societies.

Ravi has shown that the invasion of secularism, existentialism, and Eastern philosophy has led to the relativizing of truth in present day society. His apologetic is against the agnostic and skeptic stance one takes with respect to truth. He says, ‘truth by definition is exclusive. If truth were all-inclusive, nothing would be false. And if nothing were false, what would be the meaning of true?’

With regard to metaphysical issues, Ravi echoes the Socratic dictum ‘an unexamined life is not worth living’ in the words: ‘Everyone: pantheist, atheist, skeptic, polytheist has to answer these questions: Where did I come from? What is life's meaning? How do I define right from wrong and what happens to me when I die? Those are the fulcrum points of our existence.’ Thus, Ravi drives metaphysics to its practical and existential relevance. This is one genius of Ravi that he brings down philosophy to the floor of human life. Philosophy begins to become vivacious in his words; it no longer remains an abstract pastime of the melancholic. Ravi asks whether the non-Christian positions can adequately and consistently explicate the problem of human existence. He concludes that none of them are consistent in their assumptions. It is the Christian world-view alone that provides the most consistent doctrine of creation and destiny that explains the cosmological and teleological dimensions of human reality.

Though Ravi speaks on themes connected with logic and metaphysics, he also has a special thrust upon values in the present age. An expert on existentialism, Ravi divides philosophy into three levels. The first level is theoretical which seems less appealing to the general public due to the theoretical complexity involved. However, this is the foundational level of all philosophy because it is here that experts wrestle. The second level is the arts, where philosophy finds expression. Novels, paintings, music, and movies are the best place where the zeitgeist (spirit of the age) expresses the affect of the philosophical wind that is driving it. For example, Albert Camus’ The Plague (1948) and Sartre’s Nausea (1949) were expressions of the existential despair produced by feelings of forlornness and helplessness owing to the onslaught of atheism and liberalism. The second level doesn’t go into the foundational questions but approaches the philosophical problem only existentially. The third level of philosophy which is of great significance, according to Ravi, is found in the daily life of the layman, which consists of kitchen-table talks and common discourse. For instance, a mother tells her son not to do a certain thing; he asks why he should not do it, and she replies because it is wrong. There is no philosophical argument given in support of her commandment. Something is just assumed to be right or wrong by faith. The third level is just prescriptive and has no reference to the logic of the theoretical. It is very important for Ravi, however, that in certain matters of belief the foundational level must be raised by helping the believer to question his own foundations. The modern generation is a prey of philosophies and ideologies which it never questions, but simply believes and follows the implications. The result is the loss of values since values can have no absolute foundation for existence in the absence of an absolute God. Ravi also notes the post-modern feeling of disgust against the absoluteness of Truth. Post-modernism, he explains, is a mood against truth and rationality. The modern age can’t tolerate anyone professing possession of truth. However, the relativizing of truth can only mean the loss of truth, where one abandons truth to believe whatever he chooses without regard to whether it is true or false; since truth does not exist.

In an age where the visual dominates the rational and people are losing the ability of abstract reasoning, feelings are beginning to rule humans leading to apathy towards absolute values. With unstable feelings as guide, callousness and apathy are the result. Ravi sees the rise of crime to be directly related to the spread of atheism and ungodliness in the world. To Ravi, then, a return to the Biblical concept of God and salvation is necessary in order to restore meaning and purpose to human existence. In a world without definite and absolute categories, philosophy must find an anchor in the eternal Word of God revealed to man.
Labels: Biographs Ravi Zacharias Stories