Is Slaying in the Spirit Biblical? 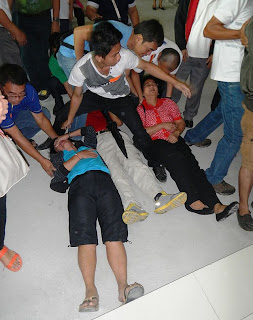 "Slaying in the Spirit" is becoming a very common phenomena with preachers becoming more tempted to post pictures or video clippings of people falling down while they minister. Wikipedia article on it, Slain in the Spirit, gives a descriptive and historical overview of it. While it is important to note here that no human can put limits to the ways that the Holy Spirit will choose to manifest His power in services, it is equally also important to not attribute to the Spirit something that is not from Him. Certainly, what is not of Him is against Him. This is not to state that the phenomenon may not be from the Spirit. However, it is certainly a point of concern when this manifestation alone is highlighted as the charismatic one. Of course, in modern times other phenomena like laughter and vomiting have also been highlighted in some circles.

The Assemblies of God position on Slaying in the Spirit is as follows:

Some expositors have noted that in all biblical instances of the powerful presence of God causing one to fall prostrate, the position was always face down, while in contemporary instances, the worshipper falls backward. When the number of worshippers who fall reaches a larger number with regularity, some evangelists have relied on “catchers” to protect from injury during a fall. Some have questioned if humans have to protect from injury if the work is genuinely an act of the Holy Spirit. But based on biblical evidence, falling down is not an evidence of spirituality. Nor is it a normative experience that should be sought on the basis of any biblical command or repeated example.

Overwhelming experiences, such as falling to the floor, are, therefore, in themselves not to be encouraged as a pattern sought by all believers. However, such experiences, when they occur, may be valid, and should not be summarily discredited.

On the other hand, some believers attending a meeting where a few are slain in the Spirit may feel incorrectly that if they do not fall, others will think them unspiritual or resisting the move of the Spirit. A “courtesy fall” is never the work of the Spirit, nor is a quick rise so others may have the experience. If one is truly slain in the Spirit, there is most likely a work the Spirit wishes to do in that life.

Ron Philips, on Charisma Magazine, has given the following Scriptural proofs for the phenomenon:

Notice some biblical evidence for this phenomenon. In Genesis 2:21, God caused a “deep sleep” to fall on Adam so He could remove a rib in order to fashion woman. He then closed Adam’s side....What God did then, He can do now. During a “falling out” time God can perform surgery and healing for people in a spiritual, emotional, mental, or physical way.

In Genesis 15:12, God put Abram into a deep sleep. God then prophesied or spoke the future over Abram’s resting spirit.

Ezekiel 2:2 reveals that the prophet saw a vision and heard a voice when he fell on his face.

During a trance experience, Daniel heard the voice of an angel speaking about the end of time. Daniel 8:27 states that when the trance was over, Daniel fainted and was sick for several days.

Matthew 17:1–6... an account of the Transfiguration. On the mountain, God showed three disciples what the significance of the Law and Prophets was and that Jesus was greater and the fulfillment of both. When the disciples heard that, they fell to the ground with faces down.

The account in Matthew 28:4 tells us that the soldiers who were guarding Jesus’s tomb were literally paralyzed with fear when the angel appeared sitting on the stone that was rolled away.

Another encounter experienced by Paul is recorded in Acts 22:17–18: “Now it happened, when I [Paul] returned to Jerusalem and was praying in the temple, that I was in a trance and saw Him [Jesus] saying to me, ‘Make haste and get out of Jerusalem quickly, for they will not receive your testimony concerning Me.’”

Revelation 1:17 gives us a compelling piece of information: “And when I saw Him, I fell at His feet as dead. But He laid His right hand on me, saying to me, ‘Do not be afraid; I am the First and the Last’” (emphasis added).

But, are such verses compelling evidence for the modern phenomena termed as "Slaying in the Spirit? One wonders. However, we can safely conclude on, at least ,the following:

Labels: Bible Studies Power of the Holy Spirit Slaying in the Spirit